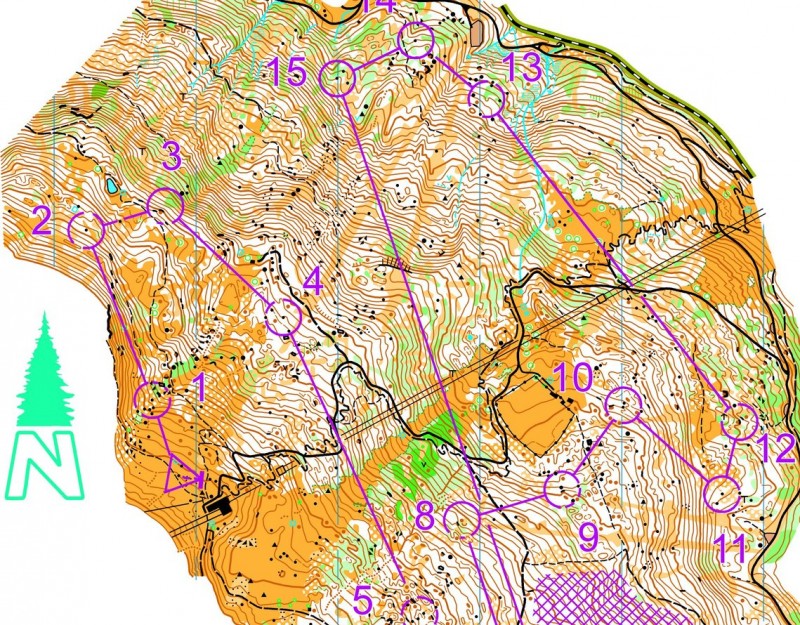 The Swiss athletes were very impressive at the World Cup Final on homeground this extended weekend, taking 4 out of 6 victories, showing  that Switzerland is well prepared for next year’s World Championships on homeground in Flims.

The weekend started with relay victories in both the men’s and women’s class for the Swiss teams, and finished off with Swiss victories on the long distance for Daniel Hubmann and Simona Aebersold. Sunday’s middle distance was won by the two overall World Cup winners Kasper Fosser (Norway) and Tove Alexandersson (Sweden).

The men’s long distance was suprisingly tight, with many changes in the top during the race both due to route choices and mistakes. Daniel Hubmann was quite far down on the results in the first part of the course, but secured the victory with strong long legs to control 16 and control 29 – and a very strong finish. Max Peter Bejmer (Sweden) was in the lead until the last long leg to control 29, but lost time on the leg and also didn’t manage to keep the speed of the Swiss athlete towards the end of the course. Kasper Fosser, already the overall World Cup winner after Saturday’s race, had a really bad start of the long distance, but managed to get up to a third place after a very strong middle part of the race – nearly getting all the way up towards the win but losing time on mistakes towards the end. The below splitsbrowser shows the battle for the top results in the men’s long distance. 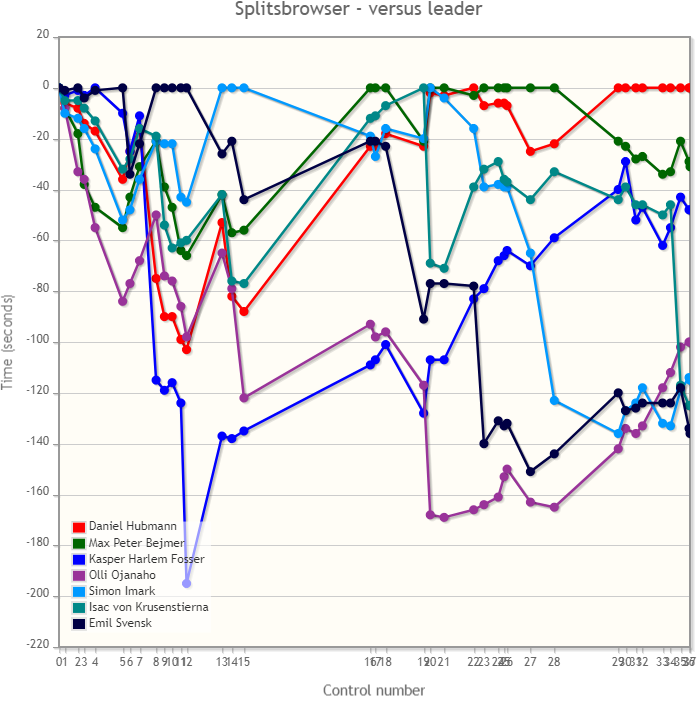 Below you see the long legs to control 16 and 29 – two of the legs where Daniel Hubmann ran faster than many of his competitors. 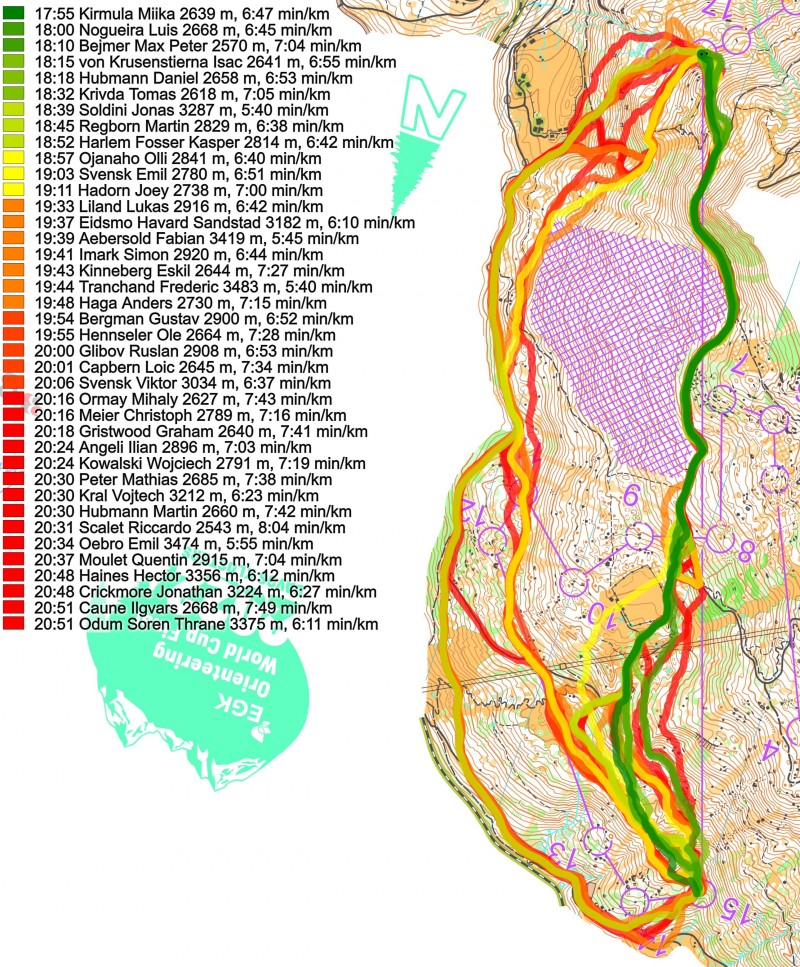 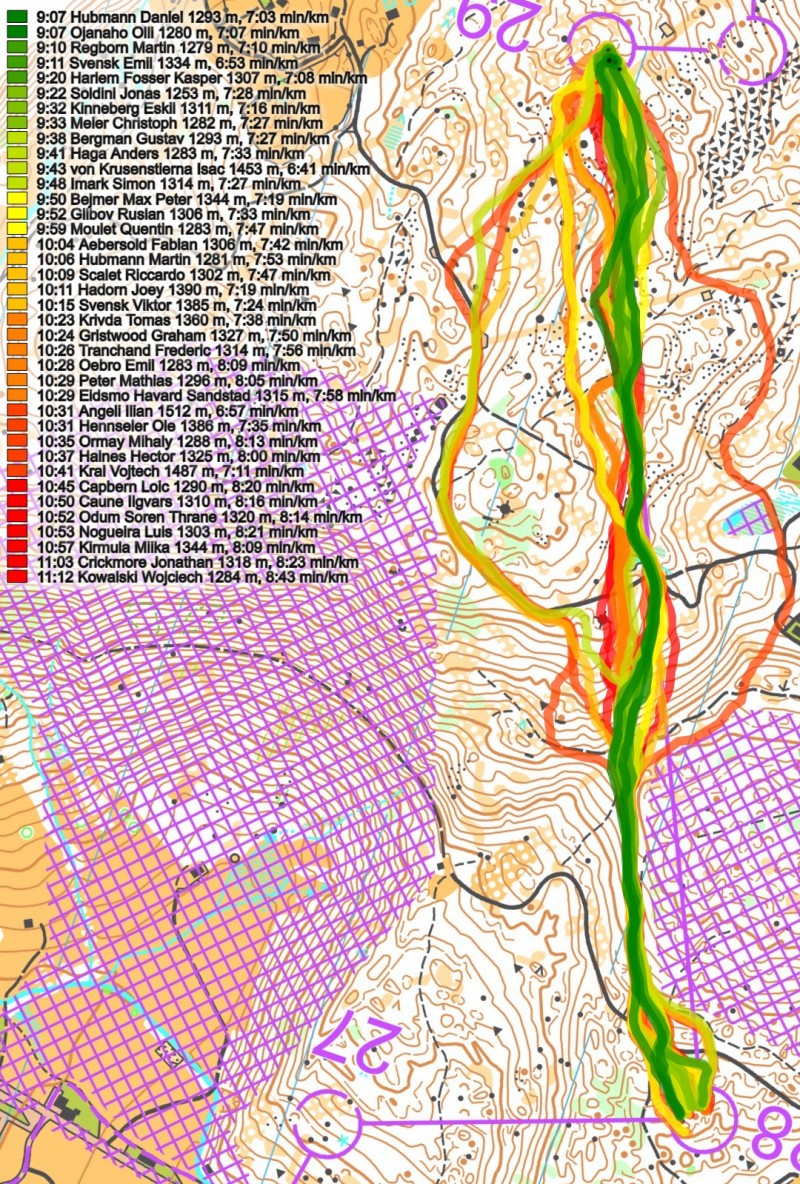 In the women’s class it was expected that the battle for victory should be between Tove Alexandersson and Simona Aebersold – with Alexandersson as the biggest favourite in the long discipline. Aebersold delivered from start to finish, but Alexandersson did a big and very interesting routechoice mistake to control 12 and another mistake to control 24, and finished down in 5th place even if she had the speed for victory. Andrine Benjaminsen ran a solid race and finished 2nd while Elena Roos finished 3rd. 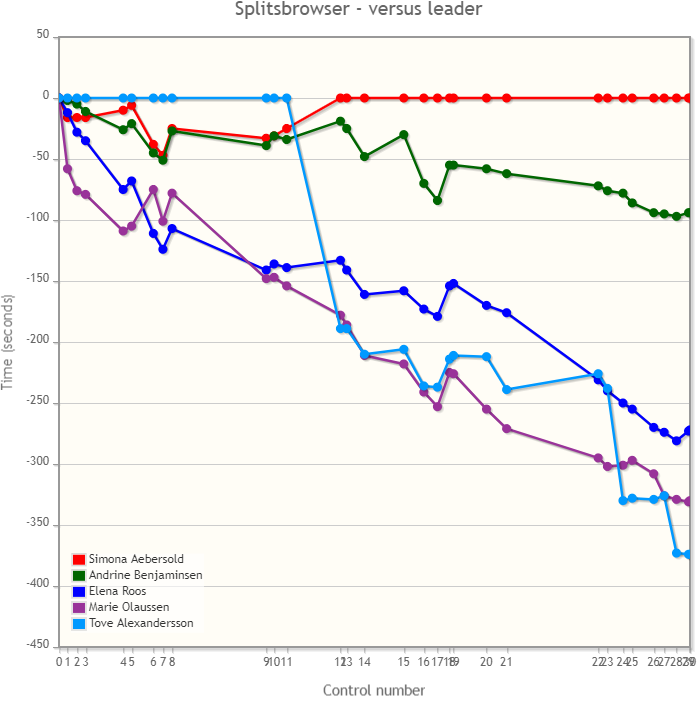 See below for Alexandersson’s route choice to control 12 (red line), deciding to go down in the tricky, slow slope instad of running on the path. The mistake to control 24 is shown below. 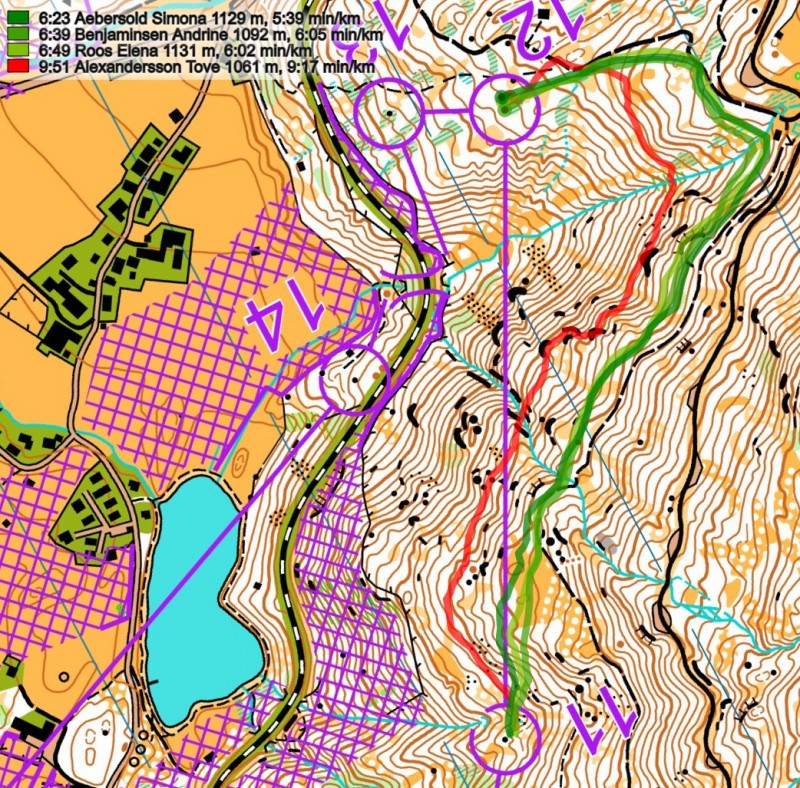 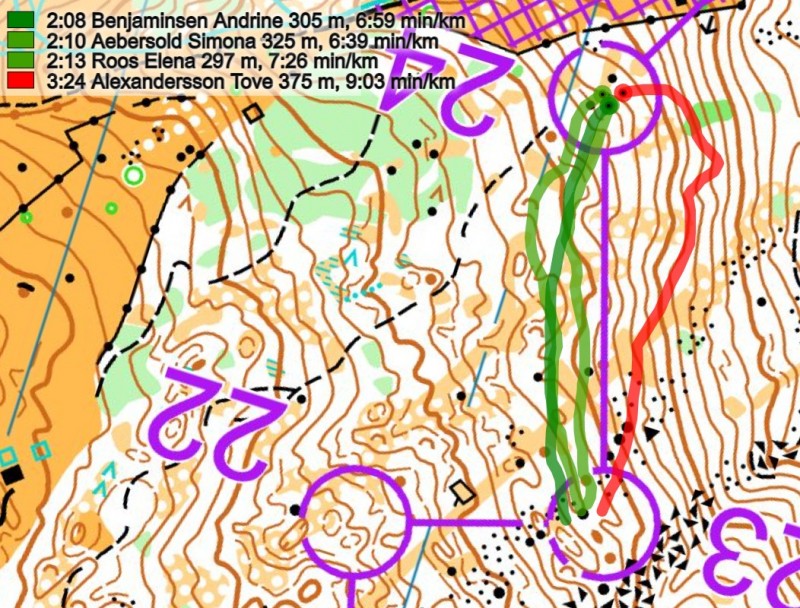 See maps and GPS-tracking for the full course below. 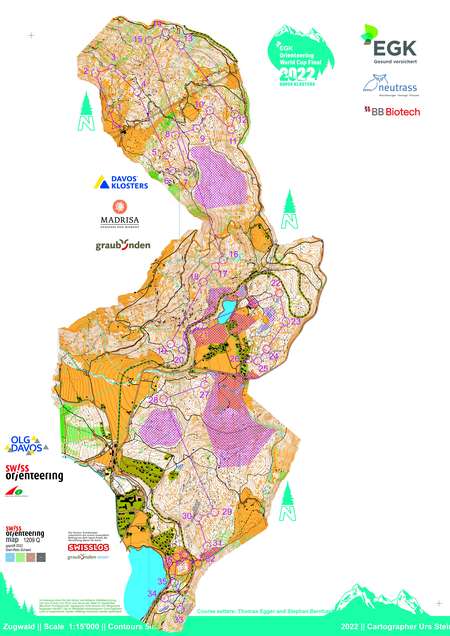 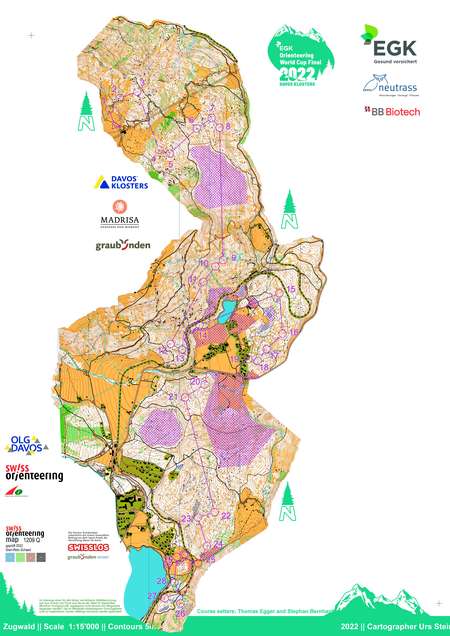 In the men’s middle distance Daniel Hubmann was on his way towards what did look like a victory, before starting to lose time at several controls from control 16 and towards the end. Kasper Fosser lost some time in the start, but a very strong second half of the race secured him the victory. Daniel Hubmann and Albin Ridefelt fought for the seconds place towards the finish, with Ridefelt taking the second place in the end. 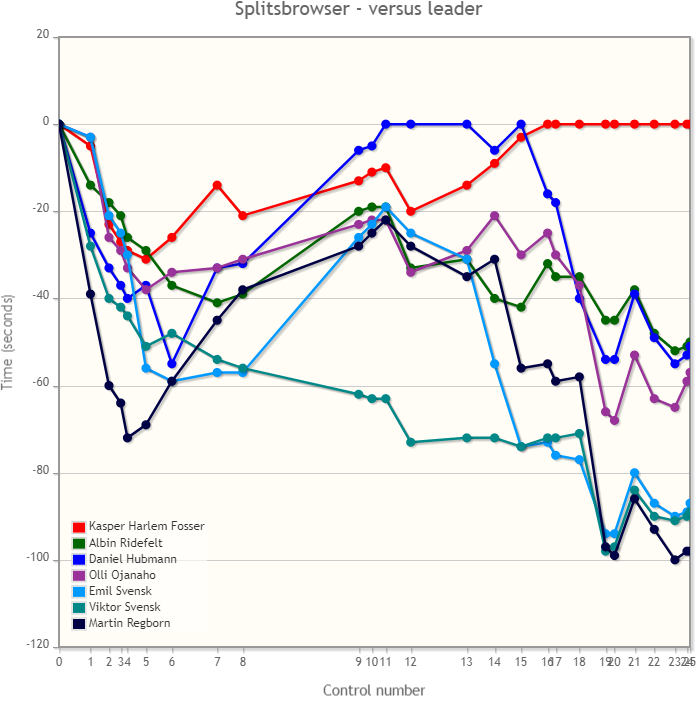 In the women’s class Tove Alexandersson had the lead almost from the start until the finish, but her performance was not as dominant as we have been used to seeing, with only 30 seconds gap to Andrine Benjaminsen in the end. Lisa Risby (Sweden) took the third place after a steady race, while Simona Aebersold lost the podium-place due to mistakes towards the end. Actually, if she had finished as strongly as Benjaminsen, she would have beat Tove Alexandersson. 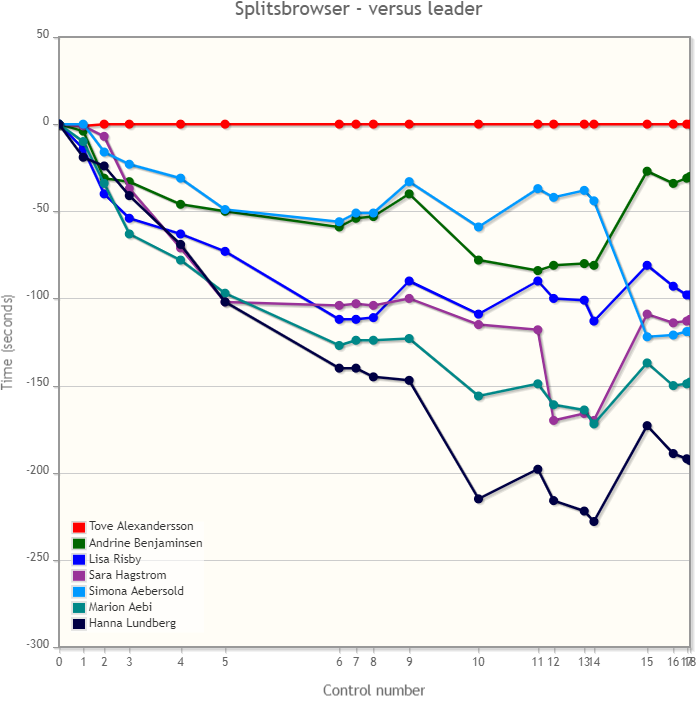 See full maps and GPS-tracking below. 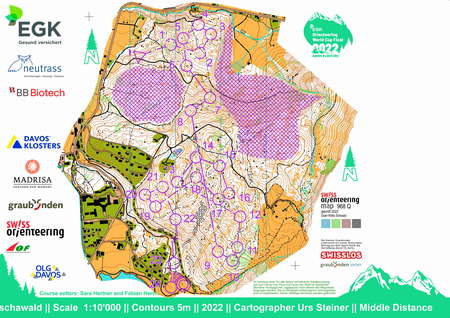 The men’s relay was a close battle between Switzerland, Norway and Sweden throughout the race, with Switzerland’s Joey Hadorn being stronger physically on the last leg while doing excellent orienteering. In the women’s class Switzerland’s Simona Aebersold had a similar combination of strong physical strength and good orienteering on the last leg. See maps and GPS-tracking from the relay below. 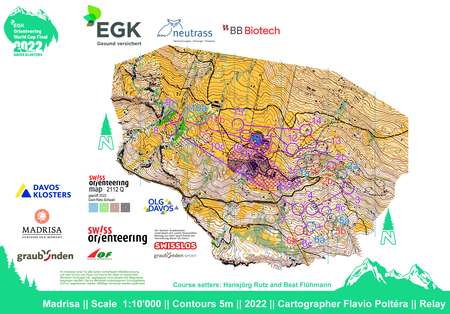 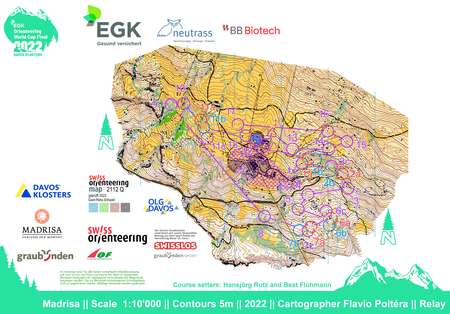 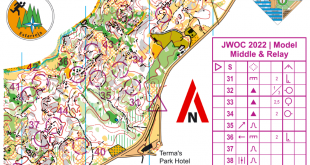 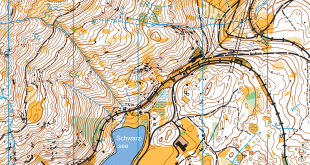 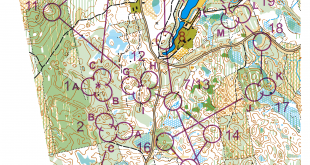 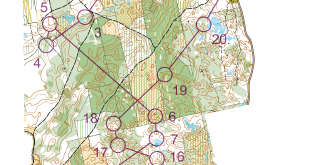 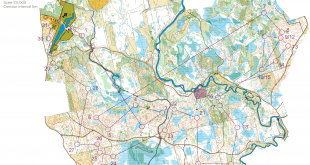