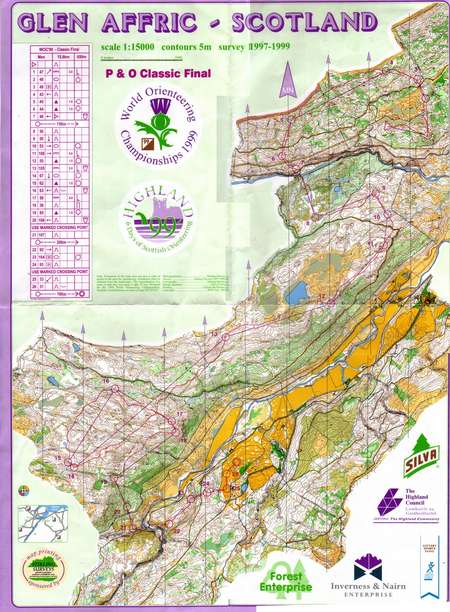 Another classic WOC Long distance race today – the WOC long distance in Scotland in 1999. The map with course is found at the O-zeugs webpage.

A PDF-booklet with the route choices of the top finishers and some history about the race can be found here (found in this thread at Nopesport). Here are some lines from the PDF:

While Norway, Sweden and Switzerland dominated the top 10 of the men’s results, Norway taking an astonishing five of the top eight places, Britain’s hopes rested on Steve Hale, Jon Duncan and Jamie Stevenson. While all three claimed personal best results on the day, Steve Hale was left disappointed with his run, saying “this year, with home advantage, I really felt I could do it. Bjørnar Valstad was in a class of his own, but the split times show I was in the hunt for second place at least up to half way. But then I started to lose it. You don’t get many chances like this in a career…”

Unfortunately a route choice is drawn on the map, but it is still interesting to take a look at one of the legs – leg 4-5. What would you do on this leg? 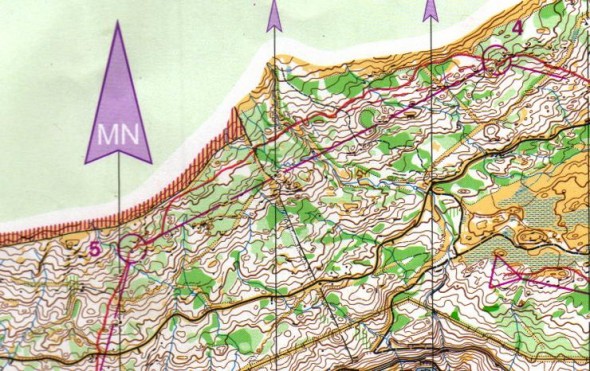 No big analysis today – but based on the PDF-booklet it looks like Bjørnar Valstad has the fastest split here by taking a similar route choice to the one drawn on the map – i.e. not going down on the road.

Update from the comments (by o-zeugs):

Some notes: On the map you see the route of Christoph Plattner who became 10th. He ran the leg in 8:51, 24th split time. Best split had Björnar Valstad 7:30, 2nd Kenneth Cederberg 7:52, 3rd Yuri Omelchenko 7:54, 4th Johan Ivarsson 8:01. Plattners notes indicate that going more direct on the first part would be faster. It is not obvious on first sight but towards north the forest is bordering open land. This leg looks quite different today