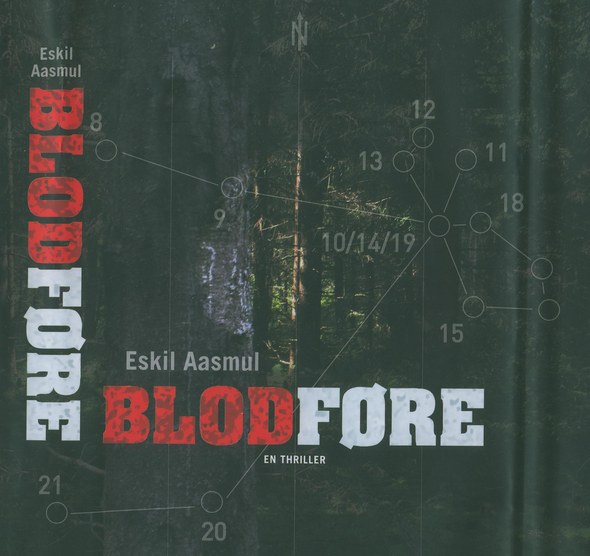 Have you ever read a Thriller about an orienteering race? Neither had I, until I read the book “Blodføre” by Eskil Åsmul – which was recently published on Forlaget Press. Actually, the word orienteering is not mentioned a single time in the book, but any orienteer will recognize the strange symbols at the cover of the book (see above) as a traditional butterfly-gaffling – and be drawn to the book just as strongly as he is drawn to the next control. I have read the book – and will give you my opinion along with a short interview with the author below. For the ones of you who don’t read Norwegian: Sorry – you’ll either have to start learning the language, or wait and see if there will be a translation…

A long race in Siberia

Eight men from different nations are running a race in Siberia in a fight to find a satellite which disappeared during the cold war. The race is denoted a marathon race, but is actually an orienteering race, where map reading has an important role. A lot is at stake for the runners – and I don’t give away much when I tell that not all of them will stay alive through all of the race…

Some excerpts from the book (sorry for the poor translation), 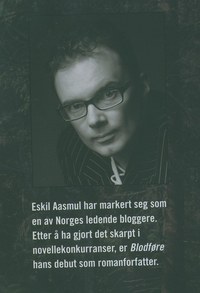 – The darkness increased his concentration, nearly making him feel that he had better control over the mapreading now than at daytime. However, he knew that the feeling was an illusion, […] the darkness made it impossible to use large terrain features for navigation, and he could pass 10 meters away from a cliff, a hut or a boulder without noticing anything but the monotonous forest he saw in the radius of his headlamp.

– The area was full of confusing knolls and small cliffs, but Vinjar ignored them, and used the compass bearing from the last big marsh into the forest. If a small cliff came in his way, he jumped it or climbed it – while he concentrated on counting his steps.

– Marco run into an area which looked extremely difficult on the map. The terrain was full of small cliffs […]. The map did not even show the cliffs – only the contours they constructed. The only way to solve the task was to read extremely accurately, from cliff to cliff – not missing a single one.

Interview with the author – Eskil Åsmul

Q: What is the relation between “Blodføre” and orienteering?

It’s written to make non-orienteers take interest in the sport. At the time I got the idea I was PR-responsible in my club, and found it difficult to communicate the true excitement of orienteering through traditional channels such as newspaper articles. The sport is so fun from the inside and looks so boring from the outside, so I wrote a report from the inside.

Q: When reading “Blodføre”, I recognized many of the feelings I have when running an orienteering race. What kind of comments have you gotten from non-orienteers about these feelings?

Many seem positively surprised that they could take interest in a book about running. Several of the reviews starts with skepticism about the thrilling factor of orienteering, (the book is classified as a thriller), but ends in positive conclusions. I think Blodføre has challenged some prejudice, but I’m not sure if the book alone will make non-orienteers run.

Q: I heard that you had to rewrite the book and get the word “orienteering” out of it to get it accepted for publishing – is that right?

Well, the word orienteering was never in the book, I was careful not to overdo the orienteering terminology. But at the first attempt I tried to sell it to one publishing house as a book about orienteering. It was rejected due to “too much focus on the orienteering experience”. At the second attempt I did not mention orienteering at all, and three different publishers wanted to publish it.

Q: Could you say a few words about your orienteering career – and about it present state?

I’m not healthy enough to run now. When I could I was no superstar, but I had enough success to have fun with the sport. And in the end, that’s what it’s all about, isn’t it? :)

Q: Any plans to translate it to English for all non-Norwegian orienteers out there, or will they just have to learn Norwegian?

I’d love to get Blodføre out in English, or maybe Swedish would be more realistic. But I have no idea how to, I’m a novice in this industry. I guess a decent Norwegian sale would help, so I’m pretty excited these days.

I read the book – and I really liked it a lot. The passages about orienteering describes many of the thoughts and feelings you have as an orienteer. You might say that the plot is not the most realistic one, but nevertheless I found the book very interesting to read – and it kept me awake reading until late at night for the three evenings I had until it was finished… For an orienteer who can read Norwegian, I’d say “Go buy it”! You can buy it e.g. at the online bookstore Haugen bok using this direct link – that is were I found it at the lowest price.

Jan Kocbach is the founder of WorldofO.com - taking care of everything from site development to writing articles, photography and analysis.
@jankoc
Previous Routegadget-creator honored
Next Gueorgiou’s story – Part I