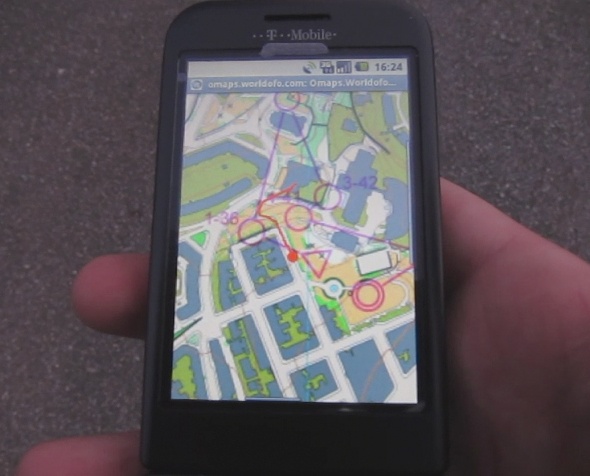 The functionality described in this article is applicable for Android phones and Iphones – but similar applications have been shown on other phones (for example Nokia series 60 phones) earlier. By starting to develop the solutions now, we’ll be ready when the technology comes along in a few years time. The solution described in this article is to be considered as “proof of concept” – to show that it is actually quite easy to get this to work. Building on this work, many interesting applications are possible.

Series about GPS and Orienteering

This article is the third article in a series about GPS and orienteering here at WorldofO.com, exploring what new technology can do to get orienteering and orienteering maps out to more people. The first article considered the conversion of any OCAD-file to a Garmin vector map (.img-file) – usable for most Garmin GPS units which have a map mode. The second article considered how to show orienteering maps on the newest Garmin GPS units (Oregon / Dakota / Colorado) as raster maps using a much more straightforward procedure taking you only a few minutes for a map. This third article considers showing your position on a modern mobile phone with GPS receiver (e.g. the Iphone or an Android phone).

The work described in this article series was done while focusing on making orienteering maps useful and accessible for people outside the orienteering community. In particular, there are interesting possibilities for the “Tur-orientering” concept when orienteering maps can be used directly on a GPS unit or especially on a mobile phone with GPS receiver. I will hopefully get a dedicated project going in this direction during winter time. 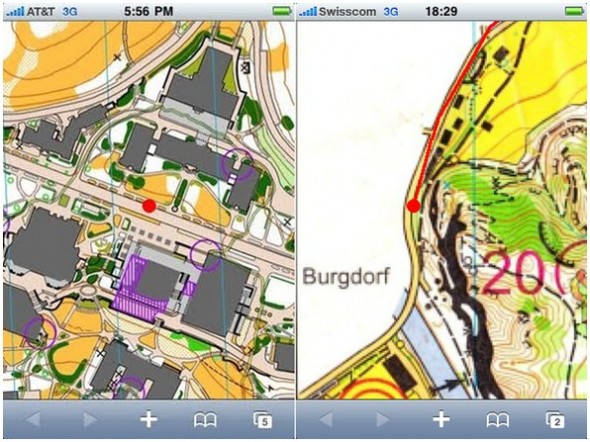 Orienteering Map on the Iphone in the US (left) and in Switzerland (right) using the functionality described in this article.

On your mobile phone, you see the orienteering map like you see it on paper. A red dot shows your current position – being updated at regular intervals (every two seconds seconds in the current version). A trailing red line shows your position the last 30 seconds. Depending on which phone you are using, you have the possibility to zoom in and out of the map. In the current test version, your position will always be at the center of the map. You can pan the map away, but at the next position update the map will be centered at your position again (this is a feature which it is easy to change in a later version). Above you see two screenshots from the functionality in use on an Iphone. At the top of the page you see a screenshot from the functionality in use on an Android phone. The links below are short reports/screenshots from people testing the functionality:

You can also see how it works in the embedded video below:

Try it out yourself

If you have got an Iphone or an Android phone – and you are on one of the maps in omaps.worldofo.com which have full location information (look for the “View in 3D” text) – it is easy to test-drive:

Remember that this functionality is very experimental – it is only to be considered as a “proof of concept” solution. Please report any problems as a comment below – I am interested in hearing how this works. The “Experimental mode” might be removed later on – but for now it will stay there to give people the possibility to try what the future might look like.

If you need to get a map into Omaps.worldofo.com to testdrive – send me an email to jan@kocbach.net with the map. Functionality to add maps directly to omaps.worldofo.com will be available soon. If you have a Doma map-archive or a Routegadget site missing in omaps.worldofo.com – please let me know the address, and I will include it.

Note! If you get problems getting GPS-signal on your Android phone, you need to turn on your GPS first, and you should start another program using the GPS in the background.

Based on these considerations, I have made a proof-of-concept prototype Android application which does exactly the same as the web-application above, but limited to a single map at the time (see screenshot below). Map size is limited to about 1Mb in the current version, but some extra functionality is added (but not ready for prime-time yet). If somebody is interested in more details, please contact me and I will share. 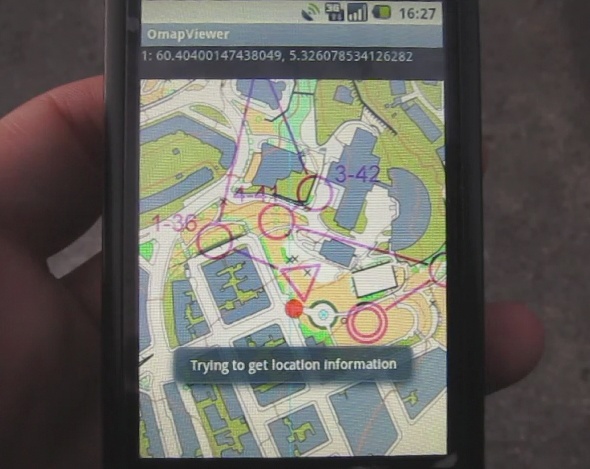 Jan Kocbach is the founder of WorldofO.com - taking care of everything from site development to writing articles, photography and analysis.
@jankoc
Previous PWT Vicenza: Maps and Results
Next The Orienteering Achievement of 2009