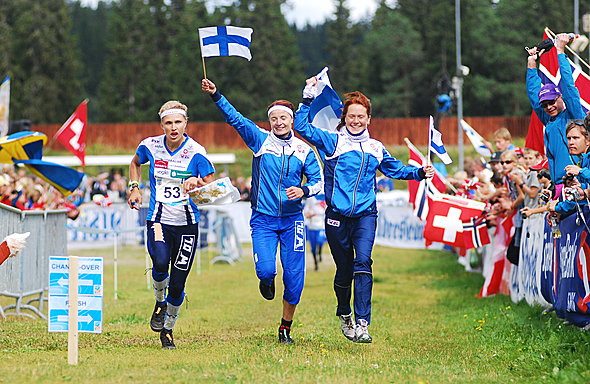 The WOC in the future groups suggestions are up: A prologue + chasing start race and a sprint relay is introduced – and all qualifications are removed except for the sprint. – It is proposed that WOC is divided into three blocks, “Sprint”, “Middle” and “Traditional” with a rest day in between each block, to give the organisers, TV, etc. time to re-group equipment and set-up in a new arena, IOF writes on their webpage.

Update! The full proposal from the WIF project group is now available here (via the Norwegian Orienteering Federation).

The full proposal includes some interesting detailing not available at the web version of the proposal, e.g.

The proposal for a new WOC program was presented at the WIF (WOC in the Future) page at the IOF webpage today. The IOF member federations now have until the 10th April 2011 to give their views and comments to the proposal. The input received will be analysed and the program possibly adjusted before a final proposal will be delivered to the IOF Council for its meeting on 5th May 2011. The Council will then decide on the further presentation of the matter to the 2011 President’s Conference in conjunction with the World Orienteering Championships in France.

Consequences for the runners

Removing two qualification races means that qualifications have to be done based on prior results. It is not yet decided if this will be based on WRE points, on prior WOC results or based on some other/combined criteria. This is the suggestions for qualifications/number of guaranteed starters for each nation: 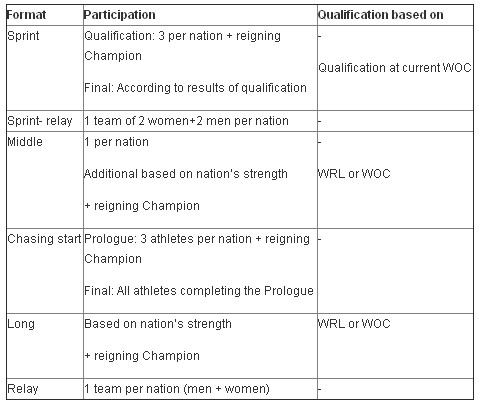 Summing up the main consequences of this proposal for the runners:

In my opinion, the work group did the wise move of not including a mass start in the suggested program (the downsides of a mass start are discussed here) – a chasing start is a significantly better alternative in my opinion. They also suggest to keep the traditional relay – also a good move in my opinion. Including a mixed relay was given as one of the guidelines to the work group, and was therefore probably not to be discussed. The good thing about this is that there will now be two races for the pure sprinters – making it more attractive to focus on sprint.

The downsides with the new program is that it might make it difficult to run all disciplines for the best runners. This is not necessarily good for the sport, but is seen in other sports as well. Also, including more  gold medals might make each medal less valuable as some have suggested in the comments earlier.

The WIF group indicated that the WOC program proposal is positive for the smaller nations by writing “In the new programme a general idea has been to provide more opportunities than in the past for nations to be represented in WOC finals”. However, in my opinion the maybe biggest downside for the sport with the new suggested program is that runners from the smaller nations will now only have the sprint race and “first runner to the finish”-races to concentrate on (except for one runner from each nation who will be allowed to run the middle distance). Take a runner from a country who today fights for a place in the A-finals ; with the suggested program this runner will probably (depending on how many will be allowed in each final) only be allowed to start in the sprint, the sprint relay, the chasing start and the relay. Thus, this runner will loose the possibility to run “real orienteering” – i.e. finding your own way in unknown terrain. Training must then be refocused onto running speed, sprint and tactics instead of o-technique in order to be best prepared for WOC. Based on conversations with several runners in this position, I think this will make some runners from the smaller countries loose their motivation for the sport. But I might be wrong – they will be represented in more WOC finals…

What do you think of this proposal? Is this good for the development of orienteering? For the runners? Add a comment below – and if you want your opinions to be heard, approach your federation with your opinions.

The WIF project coordinator commented to this article in the comments below – the comment is rewritten here:

We are happy to note the interest and publicity given on “World of O” to the proposal on WOC in the Future. It is not our intention as a project group to enter the discussion or pursuing arguments, while the IOF federations now have the proposal for consideration. However, it is important that the intentions with our proposal is clear, and for this reason we want to make the below comment.

In the article, Jan suggests that the opportunity for “smaller” nations to run in WOC may become “worse” with the proposal. We believe that this is not the case. On the contrary, the program is designed to provide more opportunties for new and developing nations to run in, and have results from WOC finals.

During the four last WOC’s, the number of nations having been represented in WOC finals are as follows:

It is correct that in theory, all nations have in the past had a chance to run a WOC final, if performing well in qualification. The above statistics shows the outcome in reality. Numbers are pretty consistent and reveals that about 60% of nations present at WOC have been represented in Middle and Long finals. With the new model, this opportunity will be higher for Long (about 70%), and significantly higher for Middle (simply 100%).

It is correct that the opportunity for individuals to run in WOC qualification races will go away. If this is considered negative, reactions will show. We believe that the value of WOC is about finals and one of our goals has been to raise the opportunity for nations to be represented in title races.

With two new formats proposed, sprint relay and chasing start, it will in fact be guaranteed for all nations to participate in as many as four finals, in comparison to the current model where only one final (relay) is guaranteed. In addition to this a nation can enter a full team in the Sprint Qualification. The only event where it is not guaranteed to start is the Long
final. Here the nation’s performance before WOC (either through World Ranking or results in earlier WOC’s) will be the deciding factor.

To answer Björn Persson’s comment briefly, I think that overall the proposal is a very good one, based on the guidelines the work group worked after. Also, my intention was not to say that the opportunity for “smaller” nations to run in WOC is worse – as I pointed out they will have just as many guaranteed starts as previously. They will obviously also get the chance to run more finals than previously (at least, on average). The problem I described is the chance for individuals to run in individual start races – which I think can be a potential problem for the sport as discussed above, because many will have. But I might have overestimated that problem based on some conversations I have had with runners from “smaller” nations earlier – in the comments to this post this does not seem to be brought up as a major problem. Also, if you let the chasing start prologue be a possibility to get a “wild card” for the middle distance, i.e. letting the best 10 runners in the chasing start prologue who were not already qualified for the middle distance run the middle, I think that would make things a lot better.

Jan Kocbach is the founder of WorldofO.com - taking care of everything from site development to writing articles, photography and analysis.
@jankoc
Previous 17th highest WRE point score ever for Gueorgiou
Next Ski WOC Sprint: Live from 10:00 CET