Lars Skjeset won the Norwegian Championships middle distance with only 1 small second ahead of Carl Waaler Kaas. Reading the blog post of Carl Waaler Kaas about the race prompted me to make a quick comparison between the two runners.

Here is part of what Carl Waaler Kaas writes in his blog post (translated from Norwegian):
– In my eyes I was not well enough prepared for the Norwegian Champs. The basic skills in this kind of terrain er good – I have shown that before. But physically I was a bit below my best. With top physics I could have decided the duels with good margin, could have got peace. It is not about luck or bad luck. And mentally I was only 99%. I did not have the security and calmness which was needed to decide the duels.

Skjeset is more offensive in the start of the course, earning time on Waaler Kaas all the way – both choosing better micro route choices and running faster when they take the same routes as it looks like – i.e. Waaler Kaas is obviously not on top physically. In the second part of the race – after passing the spectator control – Skjeset first looses time due to inaccurate direction on the leg to number 12 – then continues with higher speed than Waaler Kaas for a few more leg until seemingly getting tired when approaching the 15th control. From here and on Waaler Kaas is stronger except on the long leg from 19 to 20. Thus I would say the long leg from 19 to 20 could be counted as the decisive leg in the course – the leg where Waaler Kaas could have decided the race for himself. As you can see below – this is also where Forseth Indgaard lost his race.

This is quite typical for a middle distance race. Although there are many short and technical legs which are important for the overall result, the winner is often the one who manages to break the rythm and increase the speed on the longer legs while at the same time orienteering well.

See here for big map (Update! Fixed link – thanks to Eva J. for letting me know)

Here is also a splits comparison of the three from Winsplits: 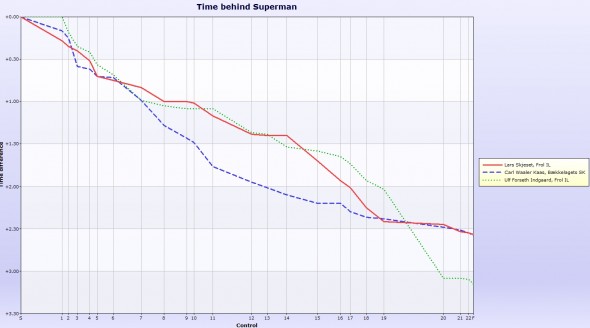 BTW: Skjeset retired from the national team ahead of this season, but still took the gold medal in the Norwegian Champs middle distance on Saturday.

Jan Kocbach is the founder of WorldofO.com - taking care of everything from site development to writing articles, photography and analysis.
@jankoc
Previous Route to Christmas 2011: Day -104
Next Lundanes: – Looks like I am supporting the destruction of orienteering