Home / Orienteering News / Lundanes: – Looks like I am supporting the destruction of orienteering

Lundanes: – Looks like I am supporting the destruction of orienteering 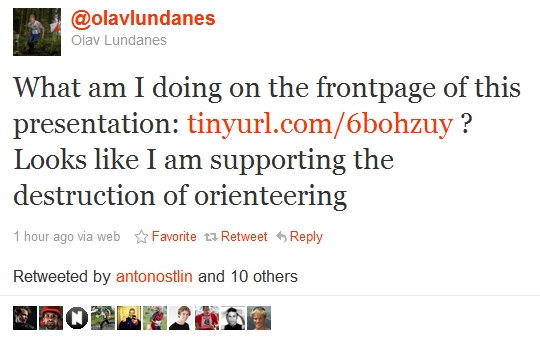 Olav Lundanes is not happy to be on the front page of  IOF’s latest update on the WOC in the future project – the Power Point presentation which was presented at the IOF Presidents Conference in France in August this year. On his Twitter-account Lundanes Tweets “Looks like I am supporting the destruction of orienteering”.

The background for Lundanes’s indignation is the suggestion for the WOC in the future program made by the IOF Council:

Basis for the proposed WOC program

The presentation can be downloaded here – or you can alternatively view screenshots of the presentation below. See also the WOC in the future webpage for more background information about the process and an article in O-zine 02-2011 about the project.

Gueorgiou: – I am really not optimistic for the future of orienteering

Thierry Gueorgiou has a similar reaction to the suggestions:

– To be honest, I am really not optimistic for the future of orienteering if IOF keeps going on that direction. Yes, I will feel extremy lucky to have experienced the good age of orienteering, but I will feel really sorry for the youngsters and I think it will be quite boring to become a coach also :(

What is your opinion about the future WOC program? Please add a comment below.

Jan Kocbach is the founder of WorldofO.com - taking care of everything from site development to writing articles, photography and analysis.
@jankoc
Previous Norwegian Champs Middle: Skjeset vs Waaler Kaas GPS autOanalysis
Next Lundanes: – For me the discussion is about challenges