Home / Orienteering News / Another one for Gueorgiou and Niggli!

Another one for Gueorgiou and Niggli! 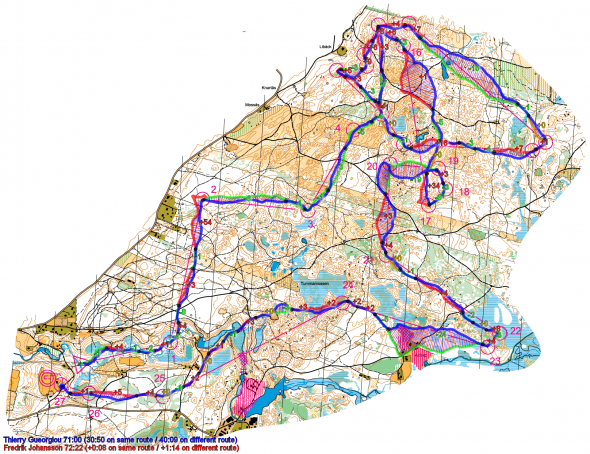 Two long distance races at Silva League – two victories each for Thierry Gueorgiou (France) and Simone Niggli (Switzerland). The two biggest names in orienteering the last years are still a few steps ahead of their rivals. Both skipped the World Cup opening in New Zealand, but with big parts of the world orienteering elite on the start line in Sweden this weekend they showed that they are still the biggest favourites when it really counts in Finland this July.

The big surprise this weekend is Fredrik Johansson (Sweden) – with two times second spot behind Gueorgiou. For big parts of the course Johansson was on par – or even faster – than Gueorgiou – but mistakes in the control circle took the victory chances away for the Swede. Johansson was on the Swedish silver medal team at EOC last year – but has taken another step this year.

– I decided to take a step up this year, and have trained a lot more than previous seasons. I also have managed not to get sick, Johansson told after his second place on Saturday.

With another second place on Sunday, Johansson appears as a candidate for the Swedish WOC team – and a medal candidate at WOC.

Analysis Silva League Sunday: Gueorgiou vs Johansson
Quick-analysis of the race between Guergiou and Johansson. The analysis relates to this map with an autOanalyis comparison between Johansson’s and Gueorgiou’s route.

Behind Johansson and Gueorgiou, Valentin Novikov (3rd Sunday, 4th Saturday) and Oleksandr Kratov (3rd Saturday) confirm that they aim for the medals this year. Also include the Swedish “Golden 90’s” Gustav Bergman and Johan Runesson – both have had a good spring season so far and finished Top 6 both days. Peter Öberg ran only Sunday – but shows that his shape is close to where it should be – Öberg will again be fighting for the Middle distance medals at WOC this year.

Absent from the top of the results list are the Swiss runners. Brilliant in parts of the course – exceptional big mistakes in other parts of the course. Daniel Hubmann (several big mistakes), Matthias Kyburz and Matthias Merz have not got their orienteering fine tuned for Nordic terrain yet. But next weekend at 10Mila that can already be changed – their physical shape (especially for Kyburz) seems to be good.

The two Norwegians on the start – Olav Lundanes and Magne Dæhlie – did also not manage to impress this weekend. Note that the rest of the Norwegian’s have been busy with important national races in Norway where Emil Wingstedt(!) won the long distance chasing start ahead of Hans Gunnar Omdal and Bjørn Ekeberg. Anders Nordberg and Carl Waaler Kaas among others got disqualified already in Saturday’s middle distance race. The Finnish runners have been busy with FinnSpring – Saturdays’s individual long distance race being won by Topi Anjala.  Finnish World Champion long distance from 2006 instead run the Silva League races in Sweden, finishing 18th and 12th. 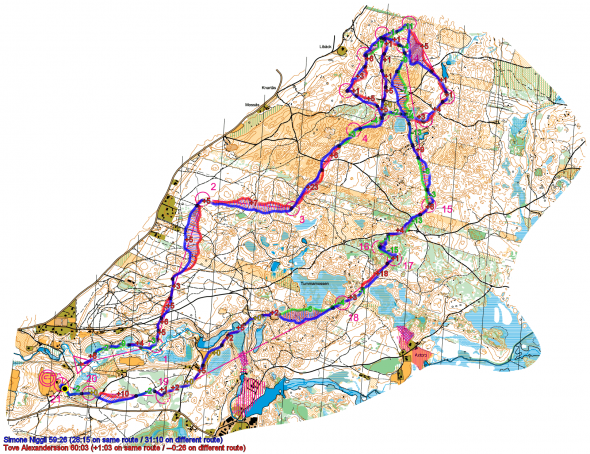 In the women’s class, Simone Niggli wins with more than 2:30 on Saturday, but as written in the analysis of Saturday’s race, Niggli is not as much faster as her opponents as she is used to. Sunday the Swiss runners winning margin was down to half a minute – with the Swedish World Cup leader Tove Alexandersson in second spot. These two where in their own class on Sunday – with more than three minutes from Niggli down to Riabkina in third – we will surely see more fights between the Swiss veteran and the young Swede this year. Riabkina has had a good weekend with two third places – but as Saturday’s analysis showed, her speed is not high enough yet while her orienteering is top notch.

Helena Jansson on the other hand seems to be in good shape. She did not start Sunday, but on Saturday she finished 2nd, and showed that she has the capacity to beat Niggli. Lena Eliasson is also fast – but unstable. Still, her speed has given her two results in the Top 5 this weekend. Also two times Top 5 for Eva Jurenikova – the new Halden coach still needs a little bit of speed and stability for the Top 3 – but the individual WOC medal hope for Vuokatti is still alive.

Analysis Silva League Sunday: Niggli vs Alexandersson
Quick-analysis of the race between Niggli and Alexandersson. The analysis relates to this map with an autOanalyis comparison between Alexandersson’s and Niggli’s route.

Looking to Finland, Minna Kauppi had good speed in Saturday’s individual FinnSpring long distance – and would probably have been up there fighting with Niggli and the others if present in Sweden. In Norway Mari Fasting won a clear victory in the chasing start – Fasting seems the be the strongest Norwegian hope.  Anne Margrethe Hausken is injured and will not start at 10Mila, but says that this is no problem with respect to the World Championships in July.

Jan Kocbach is the founder of WorldofO.com - taking care of everything from site development to writing articles, photography and analysis.
@jankoc
Previous Quick analysis of Silva League & Co
Next 10Mila 2013: Who will take it this year?