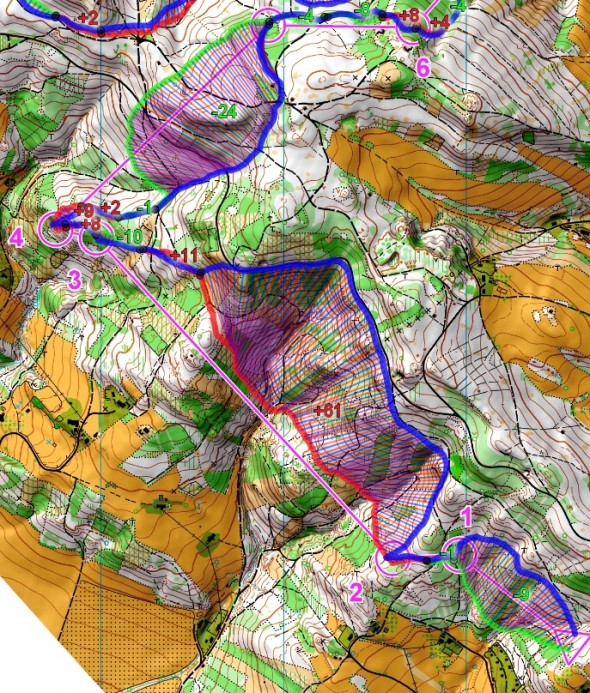 See how Piotr Parfianowicz won his JWOC gold medal based on this GPS-analysis comparing the race of Parfianowicz and silver medalist Schneider. GPS data of all athletes (nearly 170 athletes) are now in 3DRerun/2DRerun – ready for your analysis. Thanks to great work by TracTrac who helped exporting the GPS-data in a way which could be imported in 3DRerun/2DRerun.

See links to GPS-data for all runners at the bottom of this article. See also a complete autOanalysis on the first loop on a map in better resolution here to follow the analysis below better.

This part refers to the map on the top of the article where Parfianowicz’s route is shown in blue while Schneider’s routes is shown in green where he is faster than Parfianowicz and red where he his slower.

To the first control there is already a choice to be made right from the start – and the field spreads into left, right and direct. Looking at all runners, there is no big difference in split times when taking the upper route compared to the lower route – but going direct is more risky. Parfianowicz took the upper route choice, Parfianowicz loosing nearly 20 seconds to Schneider (the map says 9 seconds, but this is because the actual start is really a bit earlier) – however other runners lost significanly less by running up. 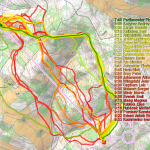 The leg to control number three is the first real route choice leg. Schneider looses more than 50 seconds to Parfianowicz by doing the wrong choice: Going direct and taking a lot of extra ascent instead of running up at the start of the leg (around to the right) – running significantly longer but flat. Parfianowicz runs 350 meters longer (around 1700 meters compared to 1350 meters for Schneider) – but with significantly higher speed. Another option here is to run down – but this is also slower. To the right you can see a comparison of some selected routes on this leg (green = faster). Note that split times are based on GPS-times and thus not accurate, but this still gives a clear picture. I might try to make updated illustrations with real split times later on. Control 3 is also the first time in the race where Parfianowicz is in the lead – a lead the Polish runner holds all the way to the finish.

To number 4 there are no big differences – but to number 5 we find another route choice. This time Parfianowicz does the wrong choice – going to the right and taking too much height – loosing 20 seconds to Schneider. Looking at all splits, there is a clear trend towards Schneider’s route being faster. Schneider runs only around 100 meters longer, but saves quite a few meters of uphill. 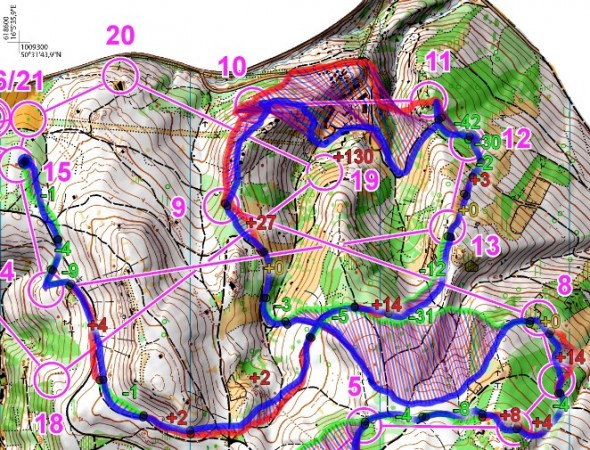 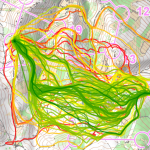 To control 6 and 7 there are only small time differences, but to number 8 we find a small mistake by Schneider costing him 14 seconds.

The next route choice leg is the leg to number 9. Here Schneider takes the direct route – earning nearly half a minute on Parfianowicz – but nearly all the 30 seconds are lost again for Schneider due to a mistake into the control, and thus finally Parfianowicz looses only 5 seconds to Schneider. The best route on this leg is Raitainen (Finland) who is 17 seconds faster than Parfianowicz by following a route similar to the one of Schneider. Note however that Johansson runs a route similar to Parfianowicz, loosing only a few seconds to Raitainen. Thus the two alternatives of Schneider and Parfianowicz are nearly equal, but none of the two top runners manage to execute the leg well. For Parfianowicz, the time is actually lost running down the hill by choosing the ridge instead of going direct as this illustration (click to see it) shows. Looking at all routes on this leg (to the right), we see that this is a leg which did have a lot of different options – I have seldom seen this big spread in routes on a leg.

To control number 10 Schneider effectively looses the race due to a mistake on the control itself – loosing 1:19 to Parfianowicz – more than he was behind in the end. To 11 there are different route choice options, but no big differences between the routes. To 12 Parfianowicz makes a mistake on the control which could have been fatal – in the end it only costs him 37 seconds to Schneider though (and another 12-15 seconds to the best split time). 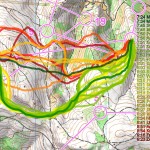 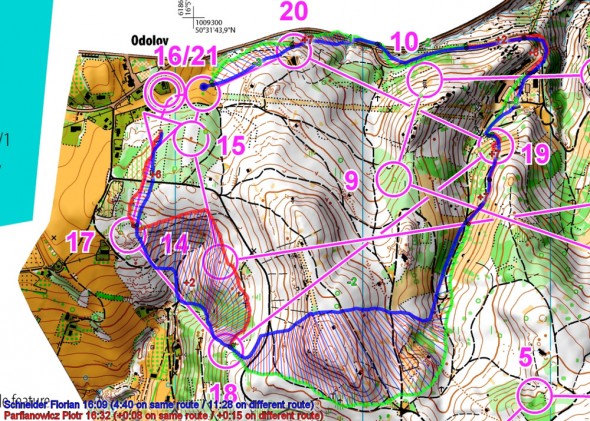 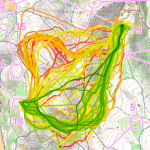 The last loop does not have that big challenges route choice wise (at least on paper – but…) – and there were no big differences between the two top runners. Parfianowicz had already decided the gold medal for himself before the last loop. Still there were route choices like e.g. to number 18 were Parfianowicz saves power by going around while Schneider takes a lot of uphill.

The leg to number 19 deserves a separate illustration (see to the right). Again a lot of options – and very clear that the routes going right like Parfianowicz and Schneider are the fastest – although Melsom again runs fast on the direct route. It is surprising how many runners take the left option here though.

Short summary: Even in this special terrain with a lot of route choice options, it wasn’t the route choices which decided the race, but the mistakes close to the controls and the execution of the chosen routes. Even with the wrong choice on most long legs, a fast runner good have won the race with good execution on the chosen route. Something to think about ….

Jan Kocbach is the founder of WorldofO.com - taking care of everything from site development to writing articles, photography and analysis.
@jankoc
Previous JWOC 2013 Middle Qual: Maps and Results
Next JWOC Middle Final: Maps and Results