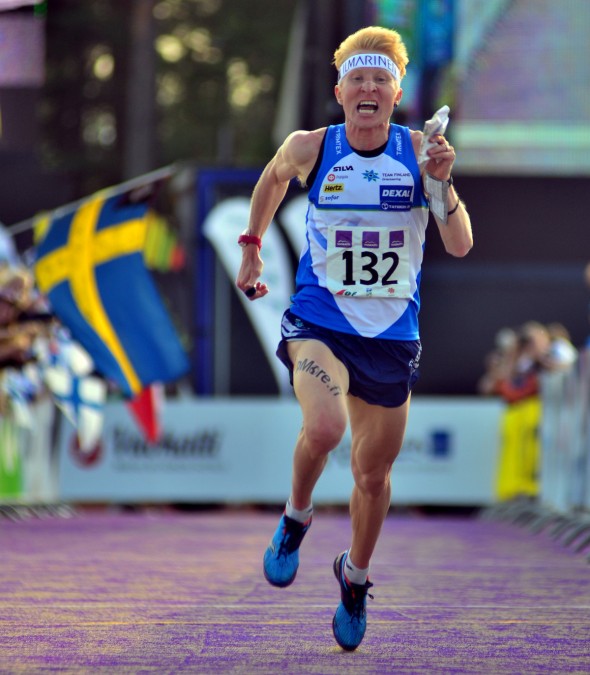 Mårten Boström won a very popular Gold medal on home ground in the World Championships Sprint today – literally running away from his competitors with higher running speed on the longer legs. In the women’s class Simone Niggli took an expected gold medal – but Annika Billstam got very close in the end after a non-optimal route choice by Niggli.

The World Champion from 2012 – Matthias Kyburz – had a clear lead after 2/3 of the race, but then Kyburz made a fatal mistake on his way to control 17. 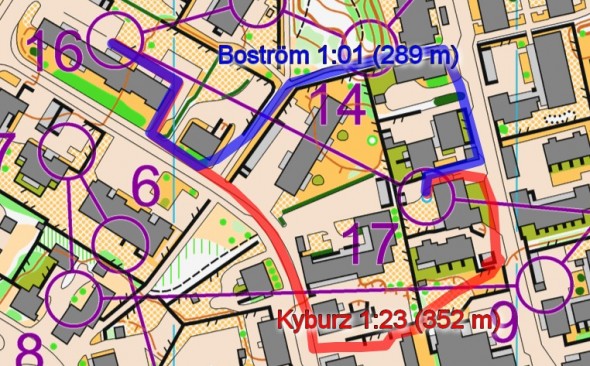 First Kyburz took the slower southern route choice – and then he  lost control and suddenly stood in a crossing without knowing were he was. In total this mistake and wrong route choice cost Kyburz 23 seconds to the best split time – 22 seconds to Boström. To 18 Kyburz made a followup-mistake – loosing another 9 seconds – and suddenly Kyburz was out of the fight for medal. With 26 seconds up to Gold at the finish, there is no doubt which two controls will feature in Kyburz’s nightmares the coming months…

While Kyburz now was out of the fight for Gold, Boström’s lead was only 3 seconds down to the young Danish runner Rasmus Thrane Hansen with Jonas Leandersson, Fabian Hertner and Scott Fraser another 3 seconds behind when arriving at the 19th control – ready for long route choice leg of the day. This long leg was Thrane Hansen’s demise – losing as much as 17 seconds to Boström by taking extra climb and going over the top on paths instead of staying down on harder ground. Leandersson and Hertner also lost some seconds on their route choice. 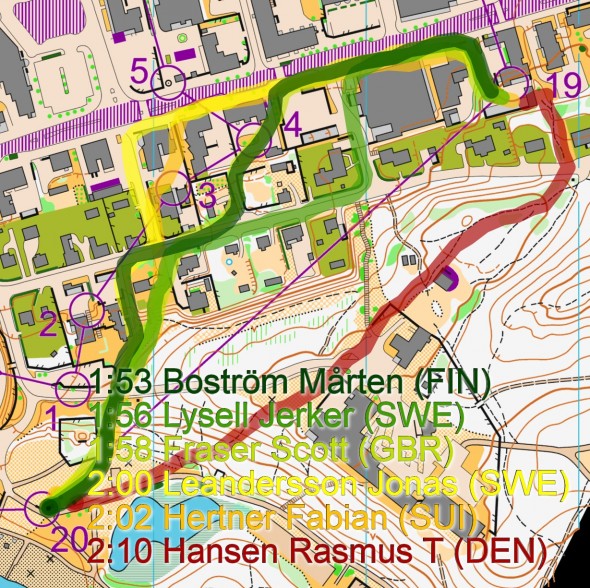 The illustrations below shows a comparison between Thrane Hansen and Boström, connecting the points were they would have been at the same time if starting together at control 19. Thrane Hansen first looses time up the hill – then is slower in the terrain – and finally is significantly slower running down the hill. While Boström runs between 3 and 4 min/km for most of the leg – just going up to around 5 min/km up the hill – Thrane Hansen is nearly up at 6 min/km for the first half minute of running on the leg. At the top of the hill he manages to run below 4 min/km, but in the downhill Thrane Hansen is again up to around 4:30 min/km. Remember that Thrane Hansen and Boström had nearly equal speed earlier in the course – although Boström was somewhat faster on the long legs with a lot of pure running. 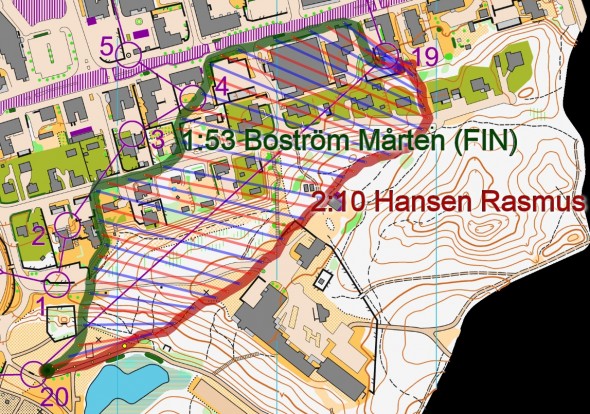 With Thrane Hansen out, there were still three runners fighting for the medals. Fabian Hertner lost the battle due to a mistake to control 22 – a mistake he described as a small mistake, but which nevertheless cost him a medal.

The splitsbrowser below shows the fight for Top 6 in the mens class. As you can see Fraser decided silver for himself on the leg to the finish – after being equal with Jonas Leandersson on the last control. Generally Boström was faster than Kyburz and the others on the longer legs – but is seems like Kyburz has an edge on the trickier short legs – an advantage the Swiss could not turn into victory today. 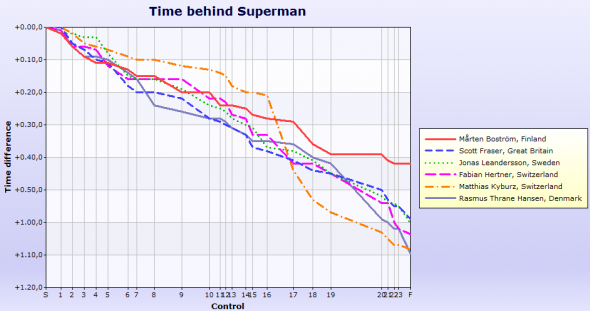 From this detailed split analysis you can see how the legs to control 17, 18 and 20 are the most decisive one in the race overall – where most runners lose time. Control 18 is also one of the legs where Boström looses most time.

Niggli challenged towards the end

Simone Niggli had the highest speed in today’s sprint as so often before. Before the long route choice leg from 16 to 17 – which was equal to the men’s long leg – Niggli had built a significant lead of 26 seconds by running several best leg times – especially dominating on the long legs. This is illustrated in the splitsbrowser below – a horizontal line indicating the best split time on a leg. 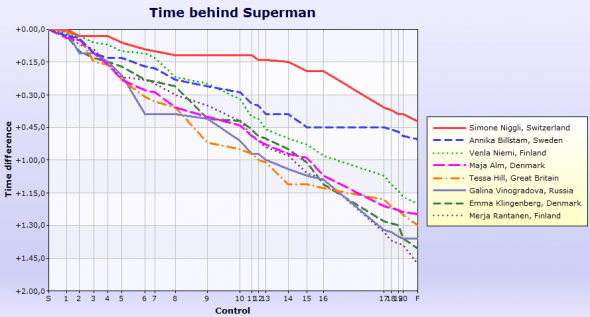 As you can see, Niggli looses nearly all the lead she has built up on the rest of the course on the leg to number 17.  The lead shrinks with 17 seconds – from 26 seconds down to 9 seconds. Niggli’s mistake is the same as Thrane Hansen’s – going left over the hill. Billstam on the other hand takes the same choice as Boström – running fast on hard surface. Just as Boström, Billstam really finds her top speed on this leg and is 5 seconds faster than the next woman. Niemi also chooses the same route as Billstam – compared to Maja Alm running over the hill. This probably saves the bronze medal for Niemi as Alm runs fast on Niggli’s route.

On the illustration below you see how Niggli’s choice is just as long as Billstam’s – but with the added ascent, the paths instead of hard ground and the downhill in terrain at the end of the leg. Rantanen chooses another option which is similar in running time to the one of Niggli with similar characteristics. 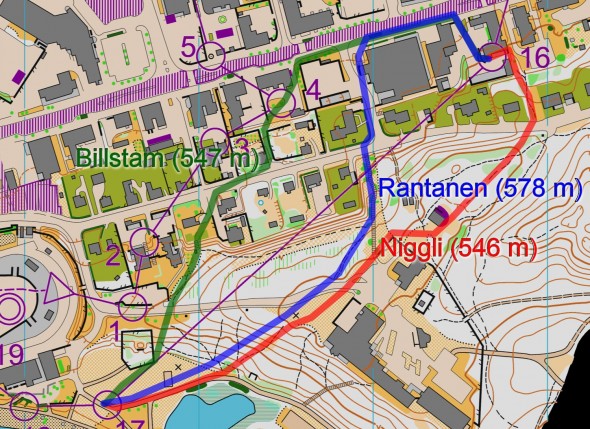 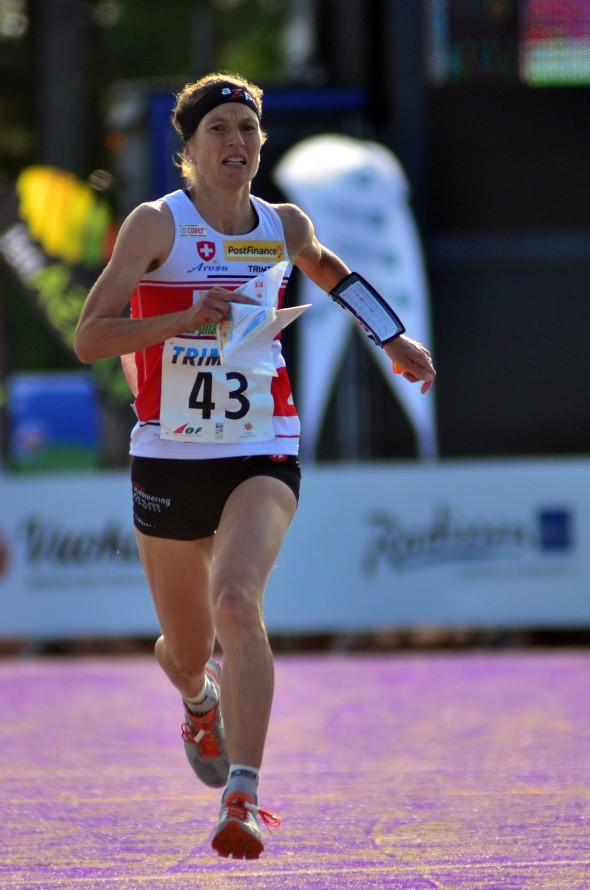 Jan Kocbach is the founder of WorldofO.com - taking care of everything from site development to writing articles, photography and analysis.
@jankoc
Previous WOC Sprint Qual: Maps and Results
Next Favourite preview WOC Long: Live from 10:55 CET