There were a few longer legs with some route choice challenges in the World Cup Middle distance race in Turkey today – even if the race was decided more by mistakes in the tricky (or even in the easy) parts than by route choices.

Below you get a quick analysis of the legs which had a route choice element. Mistakes/time losses can be seen in these two albums – one for men and one for women – see for example Martin Hubmann’s mistake at the 8th control here.

Split times given below are actual split times from the timing system (i.e. not inaccurate GPS times). See the complete course and GPS-tracking in this background article. 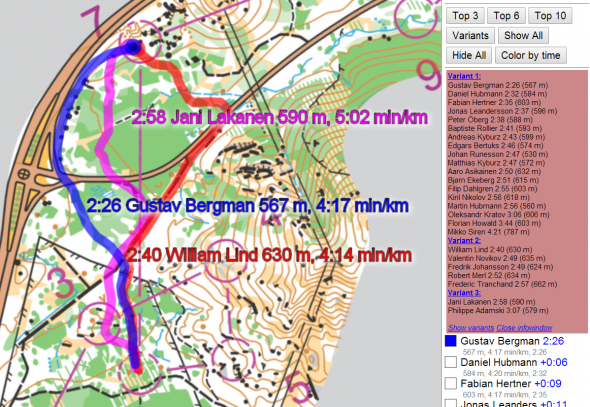 The fastest here is to go around left like most of the runners did. Gustav Bergman is fastest on this variant – with Daniel Hubmann 6 seconds behind. Matthias Kyburz also chooses the correct variant – but still looses more than 20 seconds. It is difficult to spot from the GPS where on the leg Kyburz looses time due to the GPS-signal of Kyburz being non-optimal.

William Lind (third overall) is fastest on the rightmost variant (red) – 14 seconds behind Bergman. Only 5 of the GPS-runners choose this variant (of those also Valentin Novikov) – which seems to be some seconds slower (and also more insecure).

The third, direct, variant – run by Jani Lakanen – is definitely more risky. Lakanen is half a minute slower than Hubmann. 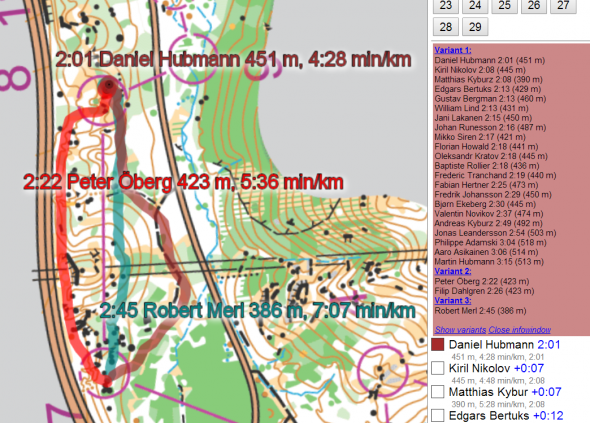 Nearly all runners go right from 7 to 8 – Daniel Hubmann being the fastest with 2:01. Peter Öberg and Filp Dahlgren go left (2:22 and 2:26) – a route choice which at the first look does not look that bad. Robert Merl goes direct, loosing even more time. 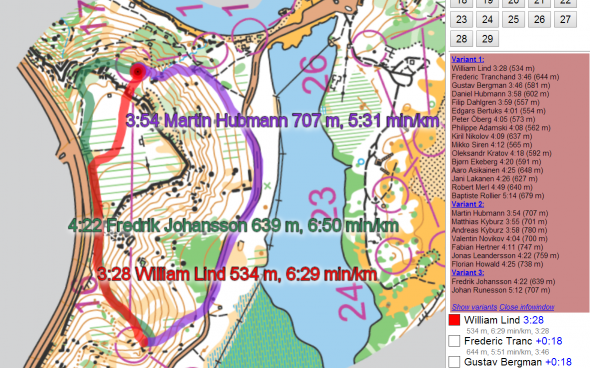 On the leg from 16 to 17 there are two distinct variants: Left adjacent to the highway or all the way down to the road to the left and up again. Most runners choose to run up – William Lind winning the leg with a large margin on a left variant (3:28 compared to Frederic Tranchand in 3:46 with the second fastest time). Daniel Hubmann has the third fastest split time of the ones running left – but still looses 30 seconds(!) to Lind. Looking carefully at the GPS-track you can see that Hubmann looses nearly all of this time on a mistake within the control circle.

Of the 7 GPS-runners running down, the three fastest run as fast as Daniel Hubmann or faster, with Martin Hubmann the fastest with 3:54. Still, left is probably around 15 seconds faster for a normal runner. Lind however does a solid job on this leg, securing him a top position in the race. 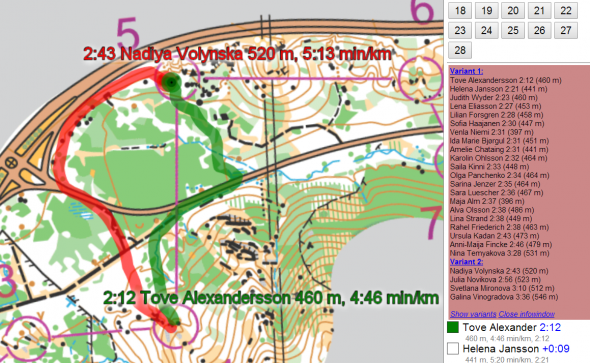 The women’s leg 4-5 had some similarities to the men’s leg 6-7. However, the women started from further left, and thus the balance in the leg is different and most women chose to run to the right. This is also the best variant – Tove Alexandersson winning it in 2:12 with nearly all GPS-runners being faster than the fastest on the left variant, Nadya Volynska (2:43, + 31 seconds). 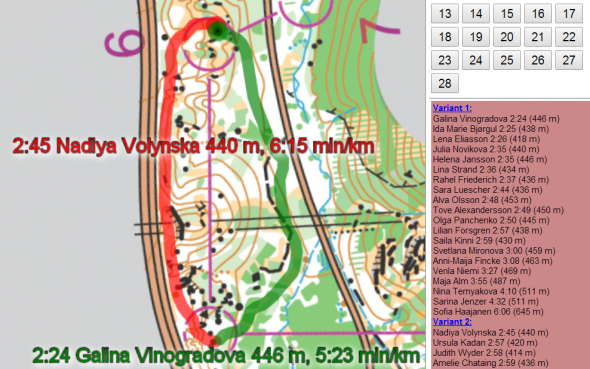 This is the same leg as the men’s 7-8, and the time differences are approximately the same with left being around 20 seconds slower. Note that again Volynska takes the wrong route choice.