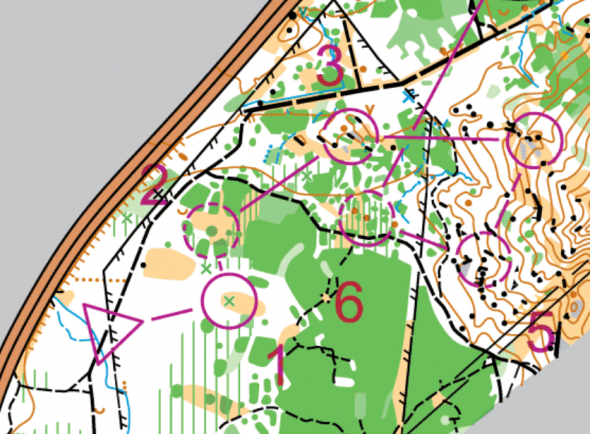 Daniel Hubmann won a clear victory in the men’s class in the first World Cup race in 2014 – with last year’s overall World Cup winner Matthias Kyburz in second. In the women’s class Sweden tookt he double: Tove Alexandersson ahead of Helena Jansson. It was again a Swiss/Swedish day in Turkey – with only Swiss and Swedish runners in the Top 6. 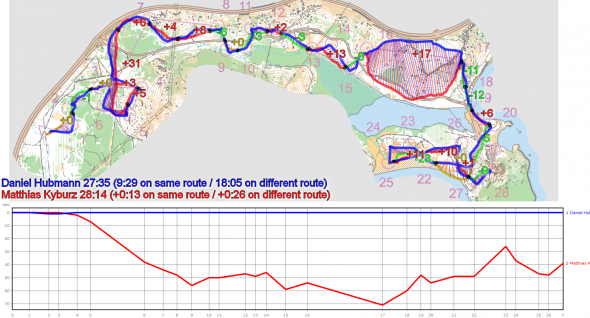 Hubmann had the best start in the men’s class – and even if Matthias Kyburz came closer and closer toward the end, it was in the end a clear victory for Hubmann – more than 30 seconds ahead of Kyburz. The above illustration (click for larger) shows a comparison between the GPS-track of Hubmann and Kyburz. Note that Kyburz’s GPS-track is not perfect. Kyburz struggled between control 3 and 8 – loosing around a minute to Hubmann in this region. As always Kyburz had a fast finish, and was on the way to close the gap to Hubmann when he got technical problems toward the end of the course.

Some controls were very tricky – others again were very easy

– I did not start so well to the first control, but except for that and a few seconds lost before the spectator control it was a good race, Hubmann comments to Swiss Orienteering.

– Some controls were very tricky – others again were very easy, Hubmann says.

Sweden’s men also had a good day – with Gustav Bergman and William Lind in 3rd and 4th. Just like in the qualification the men’s class was dominated by Swiss and Swedish runners with 8 in the Top 10! 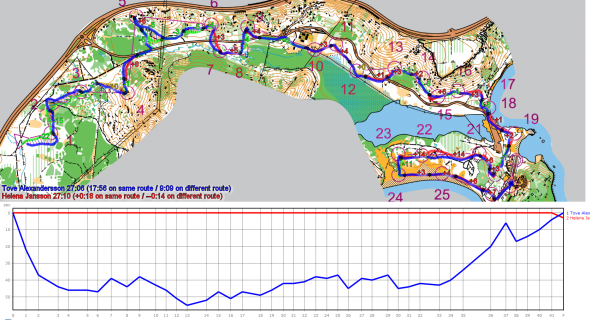 The Swedish women took the double in the women class – with Tove Alexandersson only 8 seconds ahead of Helena Jansson. Jansson did a technical more stable race – but Alexandersson was faster in the last part of the course (see the above illustration – click for enlarging it).

– It was a tough course. It was fun to not know about the terrain before we got the map at the start, the winner in the women’s class, Tove Alexandersson, said after the race.

Alexandersson will now travel straight to the European Ski-o Championships as one of the main favourites.

For  Helena Jansson finishing second this was a perfect comeback after having big problems with injuries the last year – having to skip the World Championships in Finland last year. Jansson was fighting with tears in the interviews after the finish.

– I was so tired – and I am so happy, Helena Jansson said after her race.

– It was a dream to be able to run already in February/March.

Behind the two Swedish girls there were three(!) Swiss girls – Judith Wyder, Sabine Hauswirth and Rahel Friederich. Three Swiss in the Top 5 – without Simone Niggli at the start. Who would have thought that before the start of the season?