There were three runners who had the speed to win the WOC middle distance – Annika Billstam, Ida Bobach and Tove Alexandersson. In the following analysis we go through where the women’s race was decided.

There were made a lot of mistakes in the women’s class, even among the top finishers – just as for the men. The course setter Cristian Bellotto comments about the winning times: – I was a bit unhappy that the winning times were around 3 minutes longer than estimated, but I did not think they would do so many mistakes. “Superman” in the split times [the sum of the best split times on all legs] runs exactly the estimated time for both men and women.

This analysis is made in cooperation with WOC2014 by Jan Kocbach and Stefano Raus. A modified version will be published in the WOC magazine. Note that the GPS-data was very variable for this race, and therefore there is not GPS-data shown for all legs. 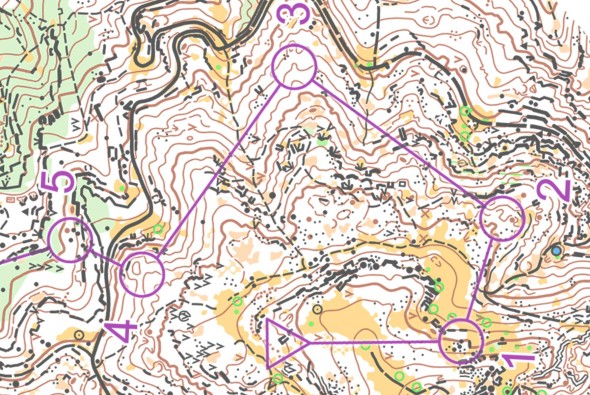 The first part until control 5 which was quite open, stony typical karst forest. The challenge here was to keep high speed while finding the good runable places and simplify the orienteering. Lizzie Ingham mastered this part of the course best – being at the lead at control 5 in 10:03 – 2 seconds ahead of Ida Bobach. Heidi Bagstevold, Tove Alexandersson and Tone Wigemyr were closest.

Annika Billstam and Helena Jansson lost some time in this area – they are 45/47 seconds behind Ingham at control 5. Mari Fasting loses 1:30 and is caught by Ida Bobach already at the 3rd control. They run together for the rest of the course. From the split times it looks like they were changing the lead.

There are some legs with interesting route choices in this area. The leg to control 3 is where Billstam loses a lot of time. She runs down to the road – losing 43 seconds to Tove Alexandersson who runs straight. Sarina Jenzer runs up and loses 3:15. Ida Bobach runs direct and loses nearly half a minute. 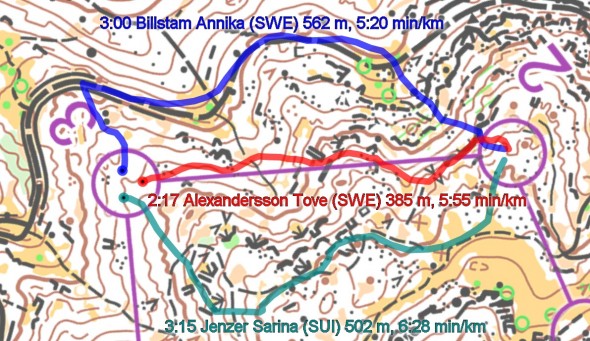 To control direct is still the best choice – but this time Alexandersson chooses to run down to the road – losing more than half a minute. Billstam runs a middle variant in the slope, losing nearly as much time as Alexandersson. 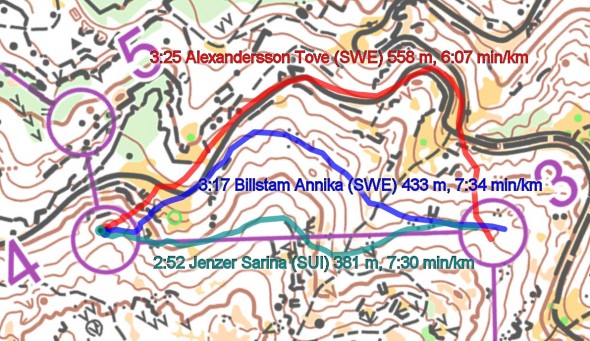 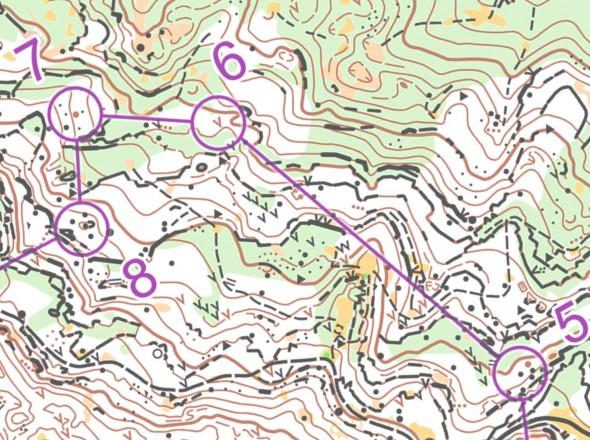 The second part of the course is the technical part (control 5 to 8). Dense vegetation, difficult to keep the direction, requires very careful orienteering and stopping to relocate if you lose track of where you are. This was the most decisive part of the race for the men, but the women barely touched this area – having overall an easier course. 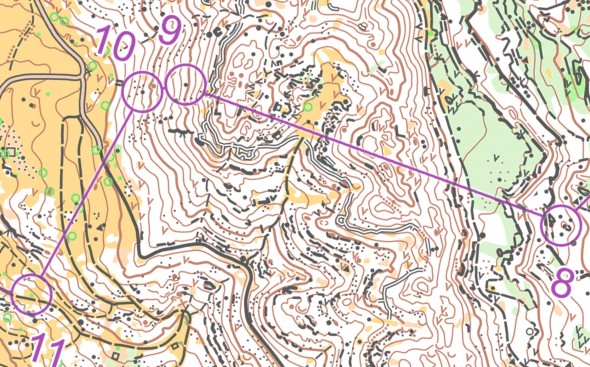 The third part of the course is the steep part from control 8 until the arena passage. It consists of one long routechoice leg and two shorter legs with TV control and an easy control down to the arena.

Fastest in this part is Ida Bobach. Billstam loses 13 seconds – Alexandersson 37 seconds. As for the men, the long leg was the most important in this part of the course. The leg was the same as for the men – and again the best route choice was going to the right and using the track on the top of the hill. Bobach and Billstam chose this variant. Alexandersson chose to run to the left – losing more than 45 seconds to Bobach. Helena Jansson also ran left and lost even more time.

Part 4: The fast part – but with technical challenges 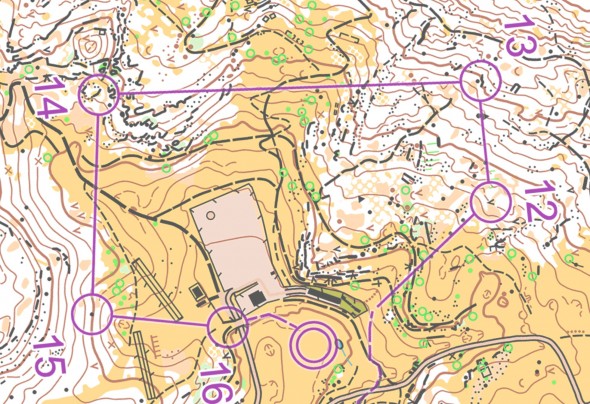 Going into this part, Ida Bobach is in the lead ahead of Tove Alexandersson with Annika Billstam in third. Annika Billstam is clearly fastest in this part of the course – winning it with 22 seconds ahead of Sara Lüscher – with this deciding the World Championships middle distance in her favour. Bobach loses 53 seconds to Billstam in this part of the course – running faster than Billstam the first two controls after the arena passing, but then missing the 14th control (see below) with more than one minute. Alexandersson also loses nearly 40 seconds to Billstam – losing all of the time (and more) to the first control after the arena passing (control 12) – a quite easy control at the edge of the meadow.

Annika Billstam, Tove Alexandersson, Ida Bobach and Lizzie Ingham won one of the terrain parts each. As for the men, the winner in this varied middle distance course was the runner who proved that she mastered all the different terrain types, Annika Billstam. She did not have the highest speed, but except for the non-optimal routechoices early in the course, Billstam did an excellent technical race. Ida had problems in the last part of the race which Alexandersson did several small mistakes in all parts of the race.

See also the main article from the WOC 2014 Middle distance which gives full results, links to full maps and GPS-tracking.

Jan Kocbach is the founder of WorldofO.com - taking care of everything from site development to writing articles, photography and analysis.
@jankoc
Previous WOC Middle Men: The Analysis
Next 1600 Photos from WOC 2014 – Sorted by Country!