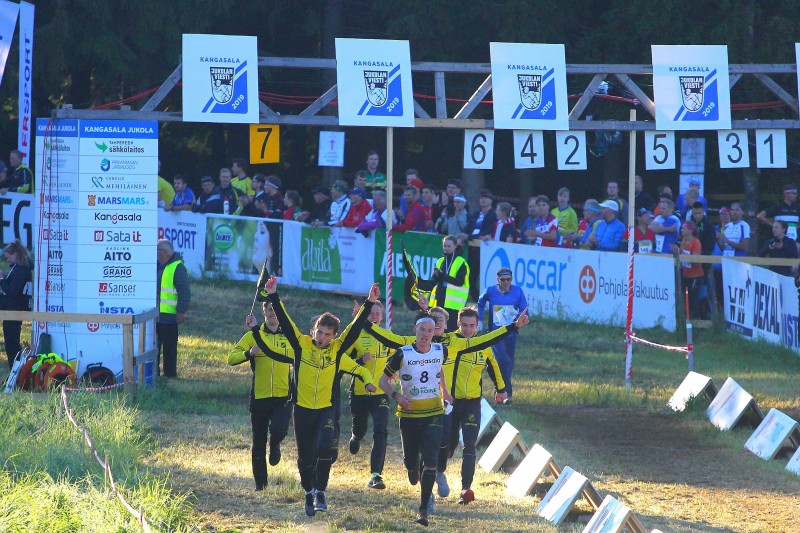 [Updated with links to maps and full GPS-tracking] Stora Tuna (Sweden) took the victory in the 2019-edition of Jukula after a strong last leg by Emil Svensk. Stora Tuna was a surprise victory with their very young team. Actually more than half of the team are brothers: Emil, Joakim, Viktor and Jesper Svensk won Jukola together with Anton Sjøkvist, Olle Kalered and Henrik Johannesson!

Three teams battled for victory throughout the last leg – with the young Stora Tuna team deciding the race for themselves through secure and good orienteering. Tyrving (Norway) finished second – one of the world’s very best orienteers Matthias Kyrburz did not manage to keep up with Svensk.  Tampereen Pyrintö finished third with Florian Howald on the last leg.

Last year’s winned Koovee finished down in 7th place, and one of the big pre-favourites IFK Göteborg finished 5th.

Read on for the race development from leg to leg – and see the full final results at the bottom of the article.

Leg 1: Kristiansand OK in the lead

Kristiansand OK was one of the dominating team in 10Mila and Jukola some years ago, but the last year’s the Norwegian team has not been battling for top results in the big club relays. But a first leg victory is still a nice one for the books and for the first leg runner Dag Blandkjenn. Rehns BK with Jerker Lysell finished second ahead of Fossum’s Einar Melsom.

Fredrikstad’s women won the Venla relay earlier on the day – but Fredrikstad can also do night orienteering, with Fredrikstad’s Hans Petter Mahisen coming first back after two legs. Tyrving is up there in second with Stora Tuna in third. Tampereen Pyrintö is down in 9th at +2:15 and IFK Göteborg is all the way down in 20th place at +3:40. Halden even further back, in 22nd with more than 5 minutes up to the leaders. Halden never came back up in the lead.

Leg 3: Tyrving on top, IFK Göteborg still in the fight

The real action starts on the long 3rd leg – this is where we get the answer to who makes it into the groups battling for top positions. Tyrving still runs impressive and comes back in the lead with Torgeir Nørbech. Stora Tuna is just behind, and as always IFK Göteborg comes out standing in third spot. Tampereen Pyrintö comes back in 6th place at +1:19.

… and straight into a new routechoice leg with the groups choosing different routes – exciting night orienteering ahead! My guess is that the groups will merge together even if around looks faster now, but everything can happen in the Jukola night! pic.twitter.com/RkGil6aJJs

And then they are together – one big group with 9 teams, the 10th team chasing just behind! pic.twitter.com/RtsC8D9jmA

After 3 legs we have Tyrving 🇳🇴 in the lead with Stora Tuna 🇸🇪, IFK Göteborg 🇸🇪, Ikaalisten 🇫🇮, Nydalen 🇳🇴 within 25 seconds. 10 teams within 2:05. Now the decisive, short 4th leg is on! https://t.co/WgDpuTBh8A pic.twitter.com/99WOPvk0hL

Leg 4: Four teams left in the battle for victory

Only four legs left in the battle for victory after leg 4: Tampereen Pyrintö, Tyrving, Stora Tuna and IFK Göteborg – all four teams within 33 seconds. Down to TuMe in 5th the gap is nearly 4 minutes. Ikaalisten, TuMe, Nydalen, OK Kåre, Hiidenkiertäjät and Kalevan Rasti all lost the possibility to battle for the victory on this short, 7.2 km, fourth leg. As always, this is where you have to put your best men in order to be in the battle for victory!

After 4 legs, darkness is fading, and it looks like we have four teams battling for victory: TP 🇫🇮, Stora Tuna 🇸🇪, Tyrving 🇳🇴 and dast year's winner IFK Göteborg 🇸🇪- all within 33 seconds. The gap down to TuMe 🇫🇮 in 4th is 3:43. Now the short 5th leg! https://t.co/PfF5exqnFn pic.twitter.com/wcANl6t3Ga

The 5th leg saw Tampereen Pyrintö running away from the other teams, opening up a 1:40 gap. But Stora Tuna and Tyrving managed to keep the gap down all the way until the finish, still finishing within 1:40 of the leading team. For IFK Göteborg it didn’t go that well, though – after the leg the gap up to leading Tampereen Pyrintö was more than 5 minutes. Now the battle for victory was between only three teams!

And then a mistake by last year's winner IFK Göteborg 🇸🇪 – the gap to TP 🇫🇮 is now 4:31! Tyrving 🇳🇴 and Stora Tuna 🇸🇪 still around 2:20 https://t.co/pdRsEPqf0l pic.twitter.com/3zZAvTxGa2

After 5 legs we have three teams battling within 2 minutes: TP 🇫🇮 with a 1:16 lead ahead of Stora Tuna 🇸🇪 and Tyrving 🇳🇴 at 1:40. IFK Göteborg 🇸🇪 now down at 4:59 https://t.co/1mHSOOcctm pic.twitter.com/juigXeQWQo

Some mistakes by all the three top teams on the 6th leg, but in the end they all finished the leg together, setting the scene for a thriller last leg. Behind the three top teams, Anders Ridefelt made a great race for OK Linné and closed the gap from 6:18 down to 3:01. A great race by Ridefelt, nearly taking OK Linné into the battle for victory. Further back in the field Olav Lundanes showed strength by running even 3(!) minutes faster than Ridefelt.

The three top teams split up on the long leg – but back again at the control. Looking more and more like a three-man battle on the last leg pic.twitter.com/VLxoAbfDaF

The three top teams split up already at the forking at the 4th control, with Tampereen Pyrintö’s Florian Howald giving a gap of 40 seconds to Stora Tuna’s Emil Svensk and Tyrving’s Matthias Kyburz. On the next controls Kyburz did some smaller mistakes, and suddenly Svensk had a 2 minute lead to Kyburz. Svensk never gave away this lead – running an excellent race alone in front. And finally could celebrate with his team-mates!

The sun is rising, and we are ready for a real thriller on the last leg of #Jukola2019! TP 🇫🇮, Stora Tuna 🇸🇪 and Tyrving 🇳🇴 within 7 seconds – OK Linnè chasing 3 minutes behind! pic.twitter.com/N0rnYQbIRG

… and we get a gap down to TP – but with a 40 second gap TP's Florian Howald can probably still see Tyrving's Matthias Kyburz and Stora Tuna's Emil Svenk ahead from time to time pic.twitter.com/rq4G480Aj6

.. a small mistake at control 24 for Stora Tuna 🇸🇪, but still looking very good for the Swedish team! pic.twitter.com/6nCDPvNPkF

Jan Kocbach is the founder of WorldofO.com - taking care of everything from site development to writing articles, photography and analysis.
@jankoc
Previous Venla 2019: Fredrikstad takes the victory!
Next EYOC 2019: Maps and Results