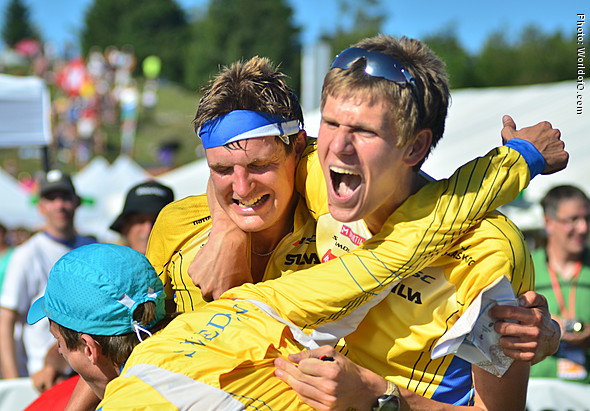 The strongest moments occur just the second when an athlete understands that he reached his big goal – after countless hours of training. Experiencing the World Champs close to the action was fantastic as always – here are some of the top WOC 2011 moments in pictures as seen from just behind the finish line.

The relay is always the race with the strongest feelings -as the runners work together towards a common goal. For the French men it was very special – after failing three times in a row under dramatic consequences. Strong feelings – great happiness for Thierry Gueorgiou, Francois Gonon and Philippe Adamski! Read the interview here. 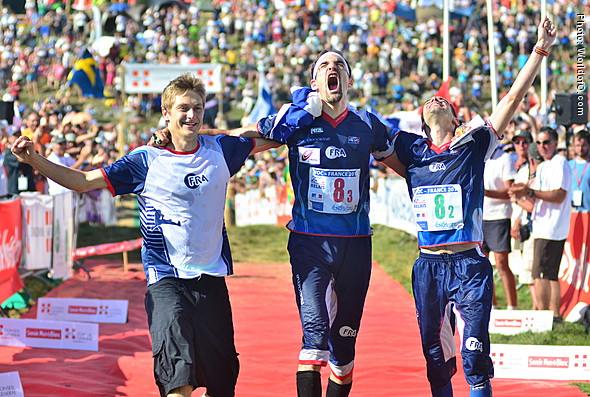 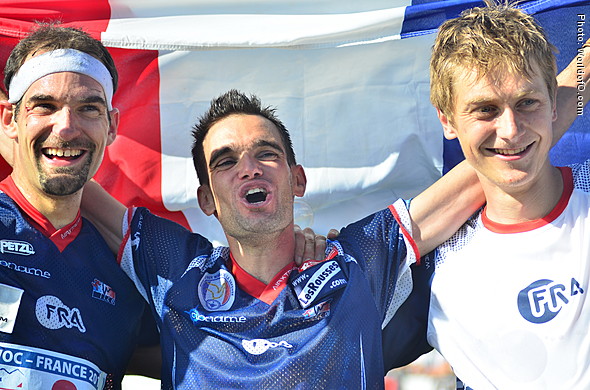 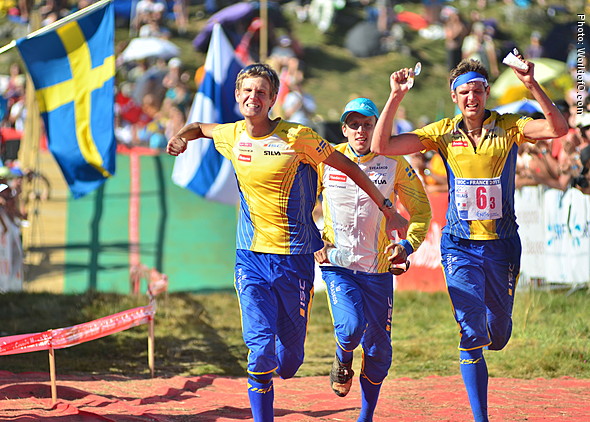 Coming back and winning a gold medal after a giant mistake in the start of the leg (see GPS replay video here) makes the experience really special for Minna Kauppi. The bad races earlier in the World Championships – the long distance in which Kauppi never found the first control – didn’t make it any weaker. – It was a mental win. I have just been waiting for this week to end, but we girls agreed that we would finish this one together and win. 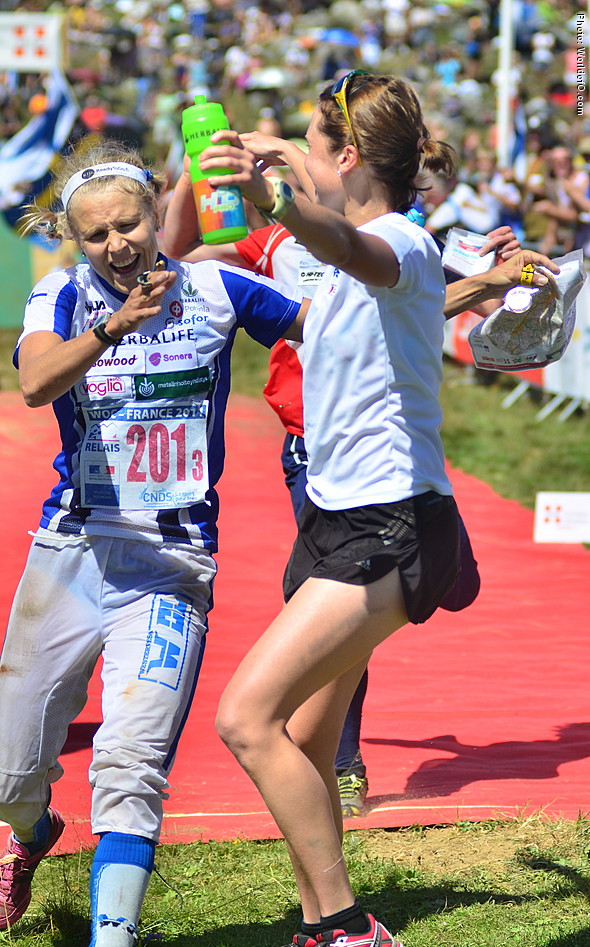 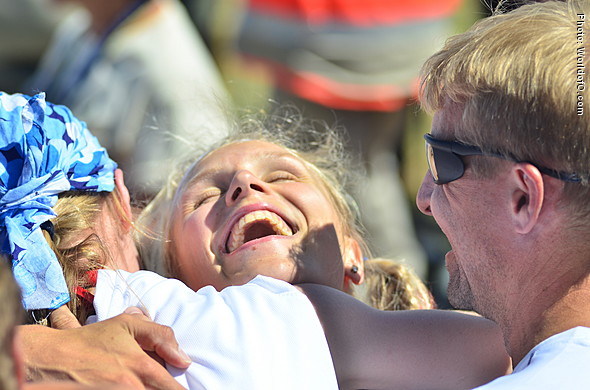 Taking silver after being beaten with one meter in the run-in doesn’t often give you the feeling of winning the silver medal, but the Czech women celebrated their silver medal just as a gold medal. Eva Jurenikova was especially high up – after a disappointing long distance where she lost the medal in the last part. – After finishing 5th or 6th in WOC relay so many times before, we were extremely happy to see Dana coming to the finish just one meter behind Minna. My first WOC medal! (read Eva Jurenikova’s WOC summary in her blog) 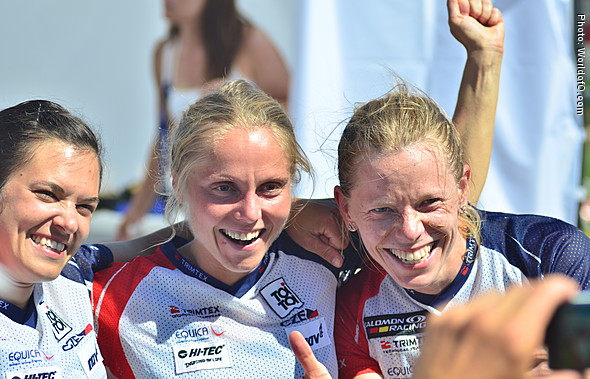 In the run-in – and when crossing the finish line – you could mostly see relief and tiredness in the face of Thierry Guergiou. The big smile came some minutes later when the new World Champion on long distance was congratulated by the gold medalist in the womens class…

– When I ran into the finish as a World Champion in Trin in 2003, I was very happy – but not extremely happy. The reason: I had already seen this in my inner mind so many times before. It was “just once more becoming World Champion”.

– Ten years of waiting is now over and big goal reached in the form of WOC-silver medal! That just about sums it up for Ikonen – but add to it that Ikonen got a big disappointment earlier in the week – not qualifying for the final on the middle distance. Read more about the race at Ikonen’s blog. 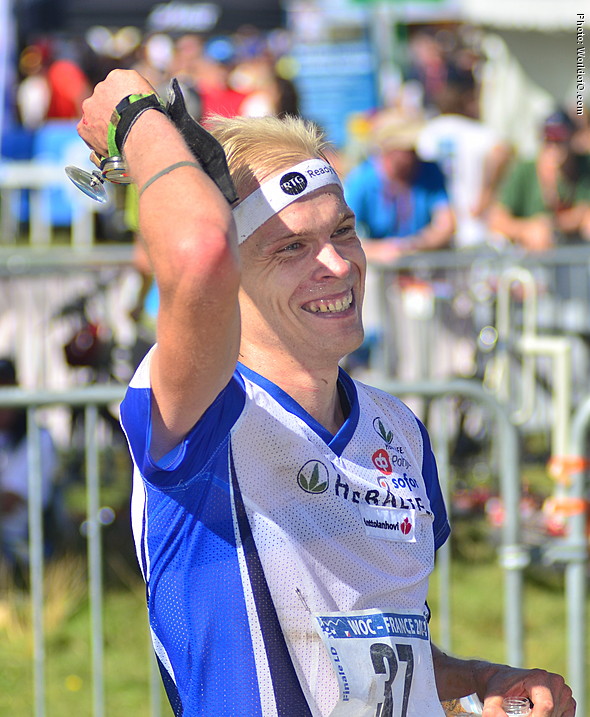 Annika Billstam was not registered at the radio control – and it was thus a few nervous seconds after finishing the gold medal race. – I was very nervous just when I came into the finish, as I heard the speaker say that they would need to check that I had taken all the controls. But everything was OK. 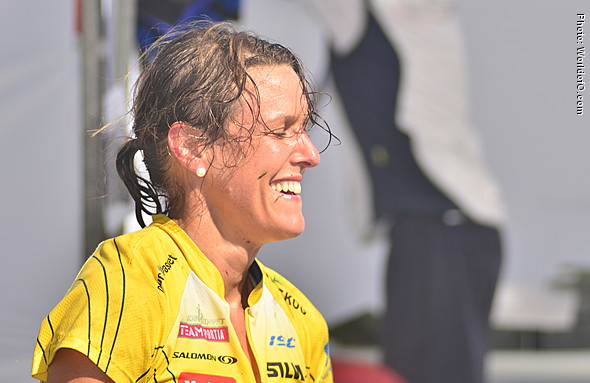 Dana Brozkova took yet another WOC medal – after not performing on this level since the EOC silver in Bulgaria in 2010. A very, very happy Brozkova after her 4th individual WOC medal since 2006 – always up there when it counts.

The most happy orienteer of the year? Not far from it for Helena Jansson after her gold medal in WOC middle distance. – It did not feel like a gold race, but it was! After silver and bronze in sprint and long – the gold medal on the middle distance tasted very good for the popular Swedish woman. 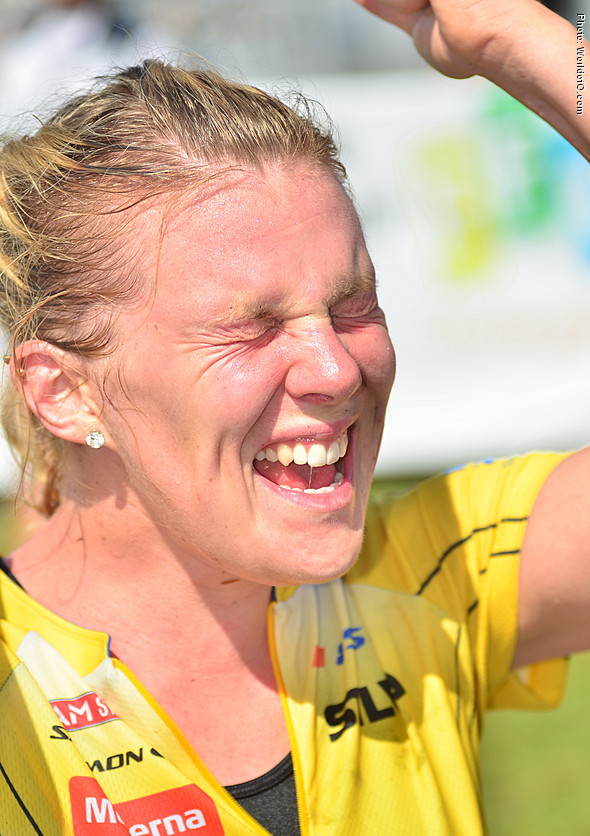 Another gold medal – another big relief for the big favourite. Maybe the mind was already turned towards the relay the day after just after crossing the finish line? The focus after the race was more on how the race had been “too easy” than on the fact that he had achieved one of his big goals.

– There were some difficult controls, but most of the race was really easy. I mean, yeah, easier than expected. You only had to follow the depression alignment and reentrants. We did 10 times more difficult trainings during our preparations and training camps.

Peter Öberg celebrated his silver medal like a gold medal – no wonder after few top results earlier in the season and injury problems.

Three very happy Swedish girls after winning a triple on the WOC Sprint – the first medal discipline of the World Championships 2011. The strongest feelings for Helena Jansson – on Linnea Gustafsson’s behalf for winning the gold medal. What a great day for the Swedish sprint women!

Big happiness for the Swiss superstar who has fought hard with injuries the last year. – The sprint discipline has always been a loved and also successful discipline for me. In Chambery I finally managed to be the fastest at a World Championships – in the 8th try after being very close several times.

Read Hubmann’s description of all his WOC sprints on his webpage – including the map with his route from each race.

The Romanian Ionut Zinca was maybe the happiest men in the sprint after his 5th place – the podium place was a big surprise for most. The picture below is taken just after he understands that the race was really good enough for a 5th place.

Jan Kocbach is the founder of WorldofO.com - taking care of everything from site development to writing articles, photography and analysis.
@jankoc
Previous France – finally!
Next Pasi Ikonen in 2001: Using compass = Bad development