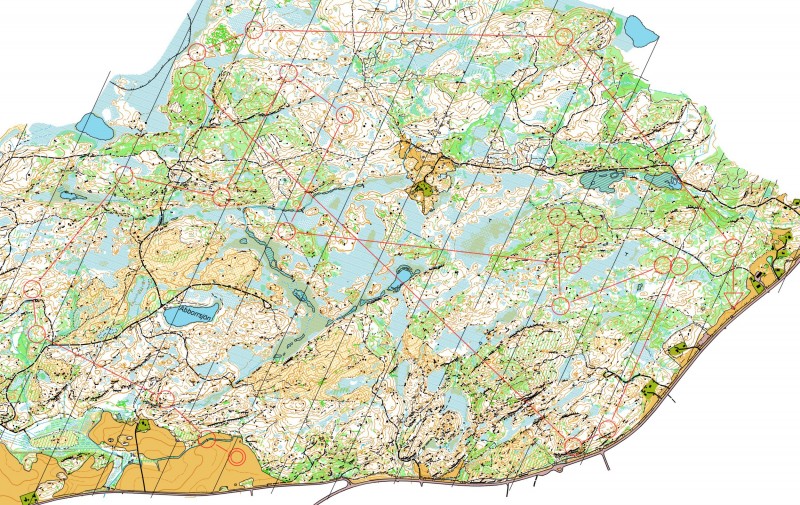 [Rest day in Sweden – Analysis time at World of O] William Lind and Simone Niggli have been most impressive so far at O-Ringen – each with victories in the two first tough long distance stages (course from men’s first stage above). Anne Margrethe Hausken Nordberg is not far behind Niggli, with shared victory on the second long distance race and victory 4 seconds ahead of Niggli at the sprint on day 3.

Of these three only Lind and Hausken Nordberg are running the World Championships in Scotland – and if they have not used too much power in Sweden this week they both show that they are fit enough to fight for medals in Scotland if their technique works just as well on British soil as in Sweden. With two more good races – one middle distance and one long distance chasing start – they may also bring nearly 100.000 SEK to Scotland for the overall O-Ringen victory and stage victories.

Simone Niggli also showed WOC shape – but having retired from the international orienteering scene two years ago the Swiss orienteering superstar enjoys orienteering without pressure (although the 80.000 SEK will but a small burden on her shoulders on Friday’s chasing start). If Niggli would have started in Scotland, she would actually have been a medal candidate in all disciplines – how many medals she would have brought home is just speculations.

Thumbs up for Leandersson – uncertain for Alexandersson

Another runner who showed good World Championships shape is Jonas Leandersson. Leandersson does not run O-Ringen, but ran the elite sprint on Stage 3 in a special race after the normal race with O-Ringen runners. Leandersson won the race – but remember that the others had already two tough long distance races in their legs. Tove Alexandersson was supposed to run this sprint, but due to a foot injury the exceptional Swedish runner could not run. According to the Swedish Orienteering Federation they hope that Alexandersson should be back on track soon and ready for Scotland, but for now there is still some uncertainty.

Swedish WOC runner Olle Boström also had a very good race on stage 1 – only 1 second behind Lind. Boström lost the stage on the long leg to control 6 where he lost nearly a minute by going right (see leg below, Boström in light blue). Here left/straight was clearly the fastest. Rollier went even further left and lost 3:30 on this leg. 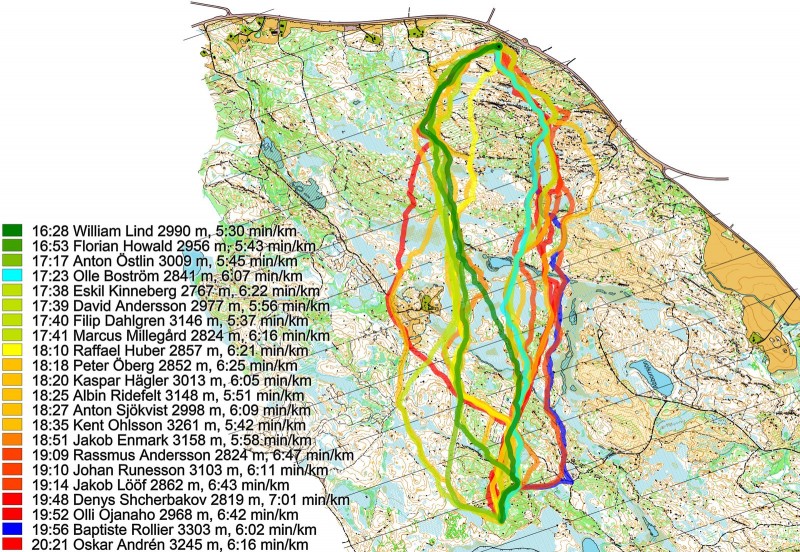 For the rest of the course Boström had slightly higher speed than Lind – and also a good technical race. Below is an example of the second leg where Boström runs fast with a direct route. Lind on similar route loses some seconds. 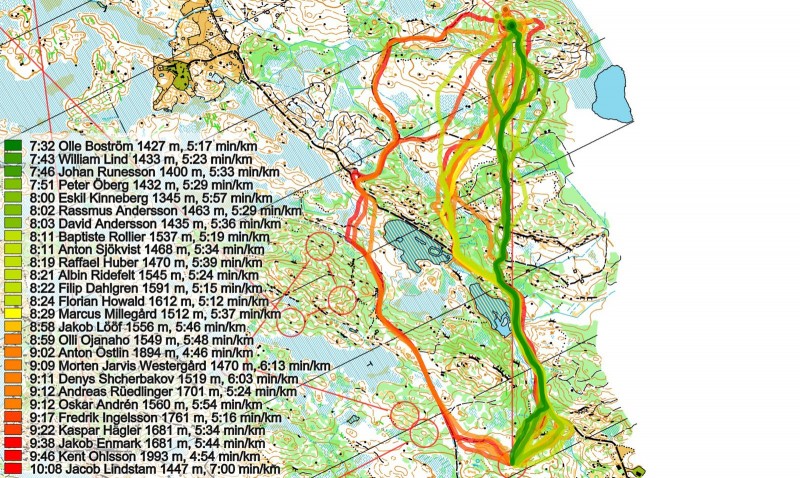 On stage 2 Boström delivered an unstable race and lost time – especially towards the end of the race.

On the second long distance day Niggli and Hausken Nordberg finished at exactly the same time. As you can see from the autOanalysis below, Hausken’s strategy was running around on the routechoice legs while Niggli took the “bulldozer”-approach and ran straight. 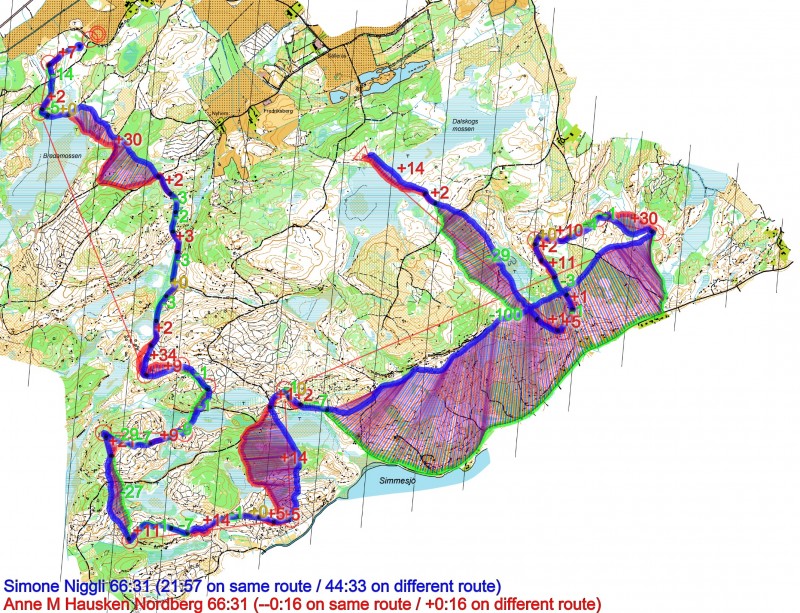 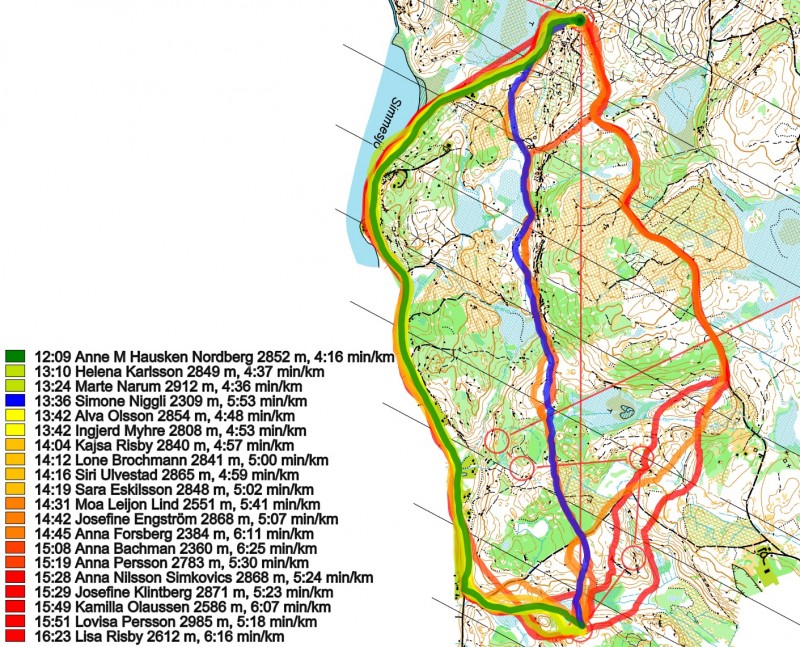 William Lind (Malungs OK Skogsmårdarna) won 1 seconds ahead of Olle Boström (Järla IF Orienteringsklubb) with Eskil Kinneberg (IFK Göteborg) in 3rd at 2:14. William Lind won 6 of 23 legs and had time losses of more than two minutes. Olle Boström lost 55 seconds at the long leg to control 6 and finished one 1 seconds behind! 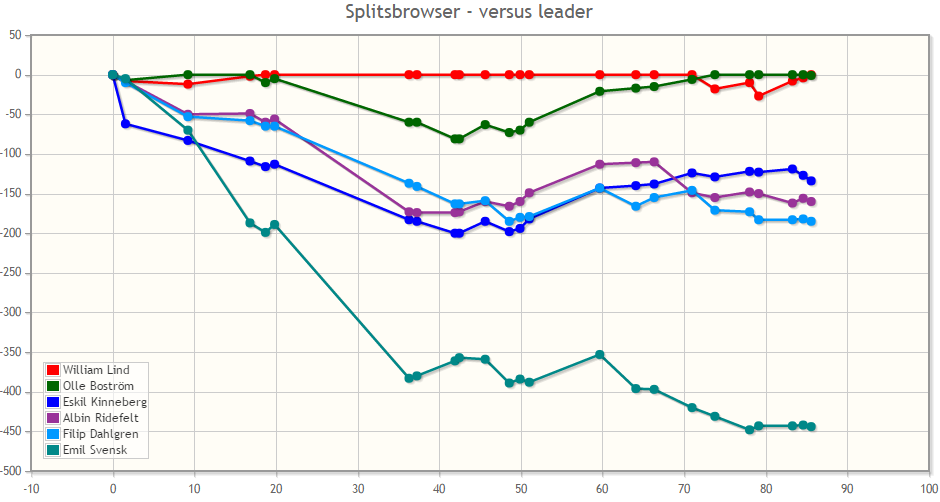 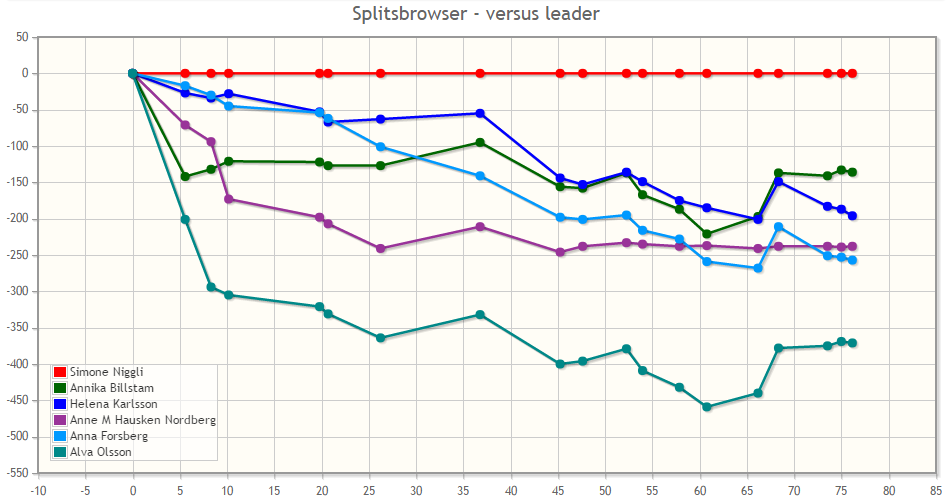 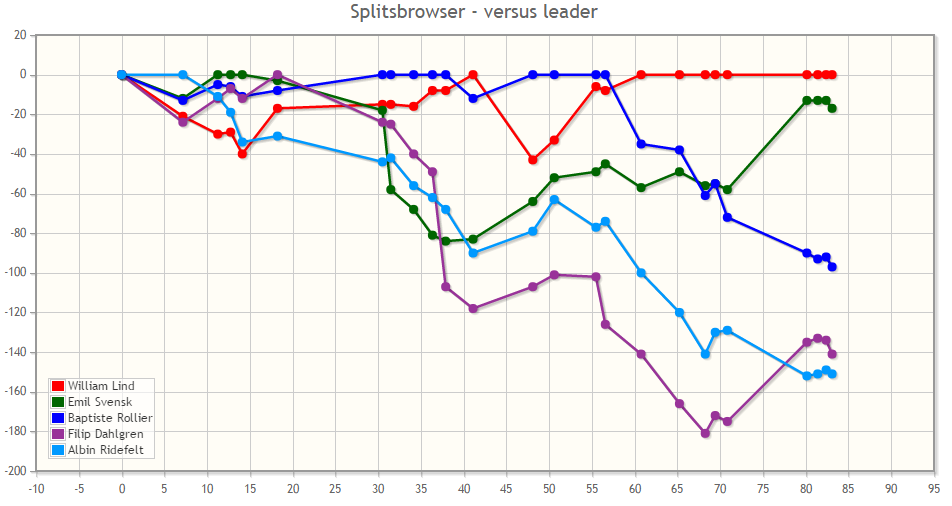 Simone Niggli (Orienteringsklubben Tisaren) and Anne M Hausken Nordberg (Nydalens SK) won a shared victory 1:32 minutes ahead of Annika Billstam (Orienteringsklubben Linné) with Anna Forsberg (Göteborg-Majorna OK) in 4th at 2:11. Simone Niggli won 9 of 17 legs. The fight for victory was close: Anna Forsberg (lost 2:26 at leg 6, finished 2:11 behind in 4th) was only one control away from beating Simone Niggli – who was again the most stable runner.  Marte Narum (Nydalens SK) lost 46 seconds or less to the leg winner on all legs – that was least of all runners in this race. Forsberg was with Hausken Nordberg the last half of the race. 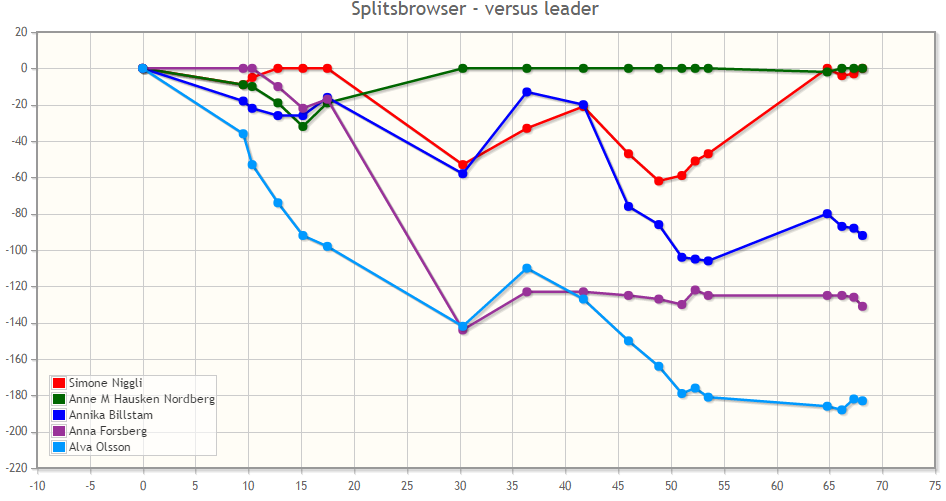 Emil Svensk (Stora Tuna OK) won 12 seconds ahead of Davis Dislers (IK Hakarpspojkarna) with Rassmus Andersson (OK Linné) in 3rd at 0:25. Emil Svensk won 12 of 27 legs and did nearly no mistakes. The fight for victory was close; Davis Dislers (lost 13 seconds at leg 1, finished 12 seconds behind in 2nd).

Svensk had a very good finish compared to the others – a bit like another Swedish star with the same first name – Emil Wingstedt – in his best days. Note also that Jonas Leandersson ran after the O-Ringen field on the same course and beat Svensk with more than 10 seconds. The main reason for Lind being so far behind is mistakes rather than simply running speed. 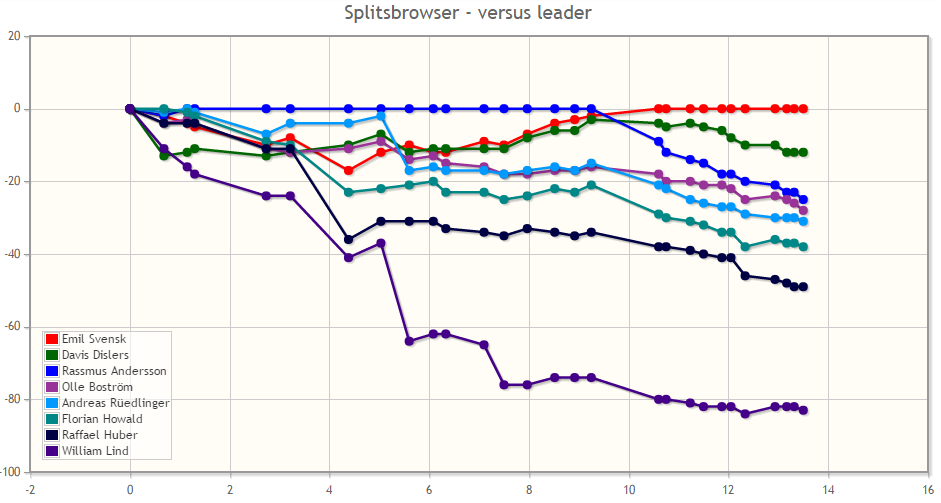 Niggli lost the race on the long leg to control 14 where she lost 9 seconds – from there and on her speed was simply lower than Hausken Nordberg’s. Note how Niggli’s start was very impressive – taking 10 seconds from Hausken and at least 5 seconds from everybody else on a 45 second leg. Niggli surely has something left. 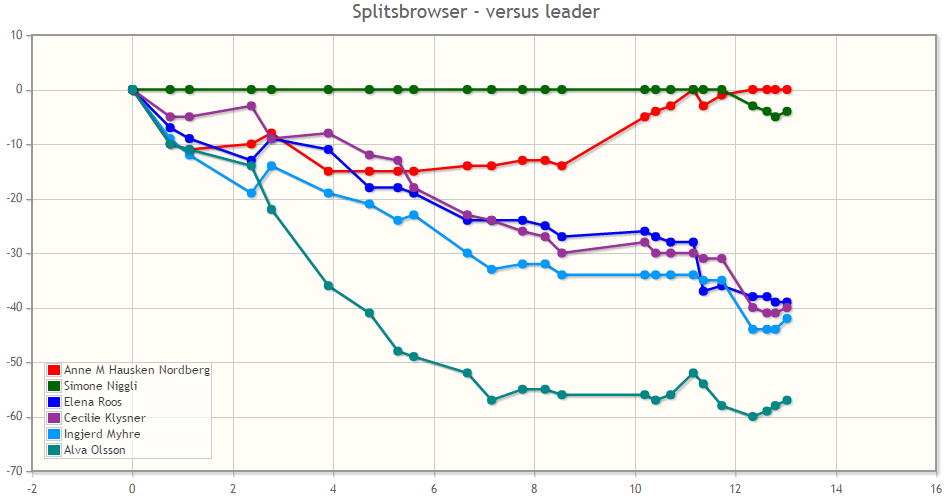 @oringenofficial sprint course. One of the final puzzle pieces before #woc2015 plenty positives to take from it. pic.twitter.com/ueZjUIuT3L

Jan Kocbach is the founder of WorldofO.com - taking care of everything from site development to writing articles, photography and analysis.
@jankoc
Previous O-Ringen: Big Show – Fight for 80.000 SEK for overall victory
Next O-Ringen 2015: Victories for Lind and Hausken Nordberg