Gueorgiou: – I had 20% of the normal capacity of my lung

Jan Kocbach August 6, 2008 Events Comments Off on Gueorgiou: – I had 20% of the normal capacity of my lung 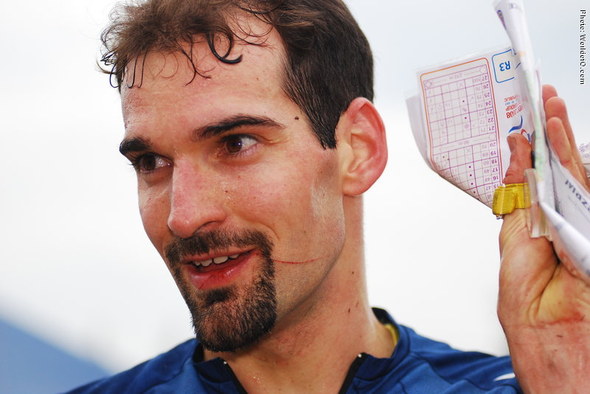 Thierry Gueorgiou describes his nightmare at the WOC Relay in detail in the latest number of WOC News – a story you shouldn’t miss.

– I was really satisfied to see the great teamwork of my two mates. They were preparing my leg very well. On my leg, I took the lead in the relay quite early and was pushing very hard like in an individual race. After the spectator control in the field, I knew that my lead was good enough and I just had to take the last controls with care.

– When I ran to the 22nd I was in full control. I punched this control and went out of the light green area. Then, in just a tenth of a second, I realized that several bees were flying in front of me. I had walked on to a bee swarm. I don’t know how, but a bee went in my mouth. I tried to spit it out, but the bee went into my throat.

– Then I had a severe nausea reaction. My pulse at that moment was probably around 180-190. I got shocked and panicky. In my mind, everything became very confused. I knew that the finish line was so close, so I pushed myself to run. But I didn’t read my map and went in the wrong direction. In less than one minute, the bite reaction didn’t allow me to breathe normally. I went very fast into a sort of asthma reaction. I had some 20% of the normal capacity of my lung.

– Our team dream – the WOC relay gold medal – was gone but I started to realise that I was also in danger.

– Then I tried to calm down and thought that I had to go to a TV man in the forest to ask him to call the emergency staff at the finish….

The latest issue of WOC news also contains a lot of other interesting stories. Print it out – and enjoy!

Read all in WOC news number 11

Jan Kocbach is the founder of WorldofO.com - taking care of everything from site development to writing articles, photography and analysis.
@jankoc
Previous Today Live: WUOC Middle distance from 0900 CET
Next Kauppi: Outside the map on the long leg