What A Fantastic Orienteering Thriller! 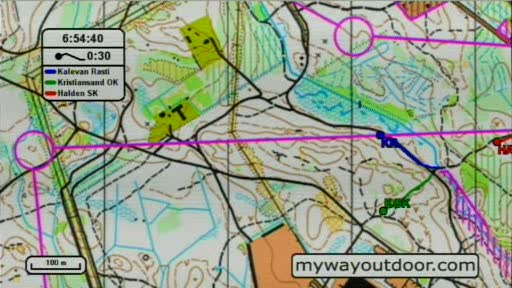 This route choice to the third last control – and Hubmanns higher speed – decided the Jukola relay after a long night of running and orienteering. What looked like an easy victory for Halden after Anders Nordbergs fantastic 3rd leg, turned into a thriller on the last leg with Thierry Gueorgiou (Kalevan Rasti), Daniel Hubmann (Kristiansand OK) and Emil Wingstedt (Halden SK) running head to head for the Jukola victory.

The ones keeping awake through all the night – following the WoO/UO LiveBlog – got a fantastic experience. We followed the excitement in the forest north of Mikkeli step by step – below you get some excerpts from the last leg. All images are screenshots from the Jukola web-TV service.

– I felt really strong, and also in the forest I made no mistake. I had one difficult situation where I lost contact with Thierry, but then I got contact with him again.

– I knew that the last foour controls were more or less running, so I was looking forward to this. I had a good feeling. 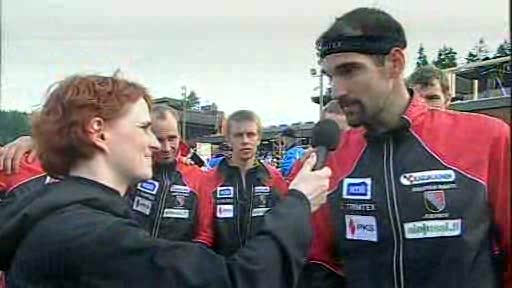 – I had a good chance in the middle of the race, but then I did a big mistake. The last kilometers I was already quite a lot behind, and I had already lost.

– I felt quite well during the race, but I couldn’t use the course to get away from Daniel because we had the same forking. Thus Daniel took the victory in the end.

The decisive moments of the last leg

Below you can relive all of the excitement – all the way from the start of the Venla relay – until the end of the Jukola relay early this morning. Enjoy! And join us here at World of O for the next LiveBlog from a big orienteering event – you won’t regret it!