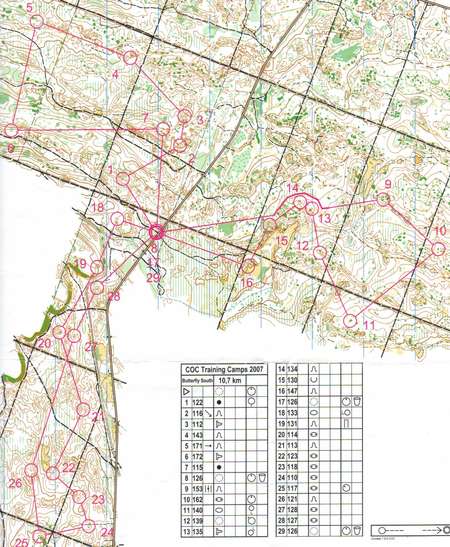 In the womens class, the situation is similar. Reading from the end of the start list, we have got Simone Niggli, Anne-Margrethe Hausken, Helena Jansson, Signe Søes, Eva Jurenikova, Julia Novikova, Angela Wild and Heidi Østlid Bagstevold.

The map above is from a training Øystein Kvaal Østerbø had on Quiaios. Quiaios will also be used for Day 3 in Portugal O-Meeting.

Taking over after Spring Cup

As written in the February Top Picks, Portugal O-Meeting seems to have managed to take over Sprint Cup’s position as the international season opening for the orienteering elite (although Sprint Cup still has a quality field). The highest scored World Ranking points ever was at POM 2007 by Thierry Gueorgiou with 1516 points. Damien Renard (2nd, 1473 points) has the third highest World Ranking score ever from the same event. Simone Niggli scored the 4th highest World Ranking points in 2009 at POM 2009.

There are several maps in the area in Omaps.worldofo.com – click this link to see maps in the surroundings. There are also some maps from runners training in this area the last days – for example the training of Alessio Tenani (see e.g. map here, and here).

I will try to update you with maps and results from POM during the next days. As an extra service, news from Portugal O-Meeting have been added on the World of O main page for the duration of the races in order to get the latest news out to World of O readers.

POM 2010 offers varied terrain – you find terrain pictures and map samples here – below a short summary of the terrain:

Some useful links for the upcoming POM 2010 competitions:

Jan Kocbach is the founder of WorldofO.com - taking care of everything from site development to writing articles, photography and analysis.
@jankoc
Previous 3 Minutes Start Interval for WOC Long!
Next StreetView + Orienteering Map = Cool!