Both for the WOC Final and for the WOC Qualification over the Long distance the start interval is increased from 2 minutes till 3 minutes, according to reports from the IOF meetings in Helsinki last week. This is very good news for the work for fairness in orienteering, as increased start interval has been found to be the best (and only really effective?) measure for separating runners in orienteering.

An extensive report on separating methods in Orienteering was published at the end of 2009. In the report, the conclusion was that “in National and International Championships with live TV coverage, the start interval can hardly be increased” due to TV (I co-authored the report, but I personally disagreed with this part of the conclusion). The issue has been debated a lot, and in a poll at World of O more than 80% of the readers wanted increased start interval for the WOC long distance.

A good decision by the IOF – the WOC long distance can still be very attractive for TV as a partly recorded/partly live transmission.

Update February 8th: According to an article published at the IOF website today, the old rule 26.2 is now modified into a new rule 1.2. The IOF article says

In individual interval start events the competitors are expected to navigate independently (old rule 26.2, now modified in new rule 1.2). In mass start and chasing start events where competitors often run in close proximity to each other, navigational skills shall still be a major factor in determining the finishing order (new rule 1.3).

Thus, it seems like the IOF actually did rephrase the rule back towards its old wording from the 2007-edition of the rules, and moved it from rule 26.2 to rule 1.2 (as I suggested above). Rule 1.2 defines what orienteering is, including that you should take controls in the correct order, etc. Thus, this is not a rule which is going to be enforced, but rather a rule which says something about the fundamentals of the sport.

Sorry for the confusion. My main source for this part of the article was the SOFT article which did not specify that the old 26.2 would be reinstated. My other source told me that 26.2 would be removed, and that some variation of the old rule would be put into some guidelines. I guess 1.2 might be looked upon as guidelines rather than rules, even if they are part of the rules. Overall, I’m now happy with the rule changes – the main positive factor being that there is now a 3 minute start interval.

The original story about rule 26.2 is still contained below.

On the downside, the IOF removed the rule 26.2,

The Nordic Orienteering Federations are very upset with the removal of this rule, and are now sending a protest letter to the IOF according to the article. See also article/discussion at Alternativet.nu (Swedish language).

The reasoning for removing the rule, is according to what I have heard that this rule is problematic due to protests not leading to disqualification even when runners did clearly run together for large parts of the course (protests in WOC 2005 and WOC 2009). An alternative instead of removing the rule altogether, might have been to rephrase the rule back towards its old wording: “In an individual interval start race, competitors are expected to navigate and run through the terrain independently”.

The Swedish Orienteering Federation is considering taking the opposite route – they might introduce a rule for Swedish competitions disqualifying runners who are within 12 seconds for more than 3 controls in a row (Swedish text).

Do you think it was a good decision by IOF to remove this rule? Is the Swedish alternative better? Do you see any better alternatives? 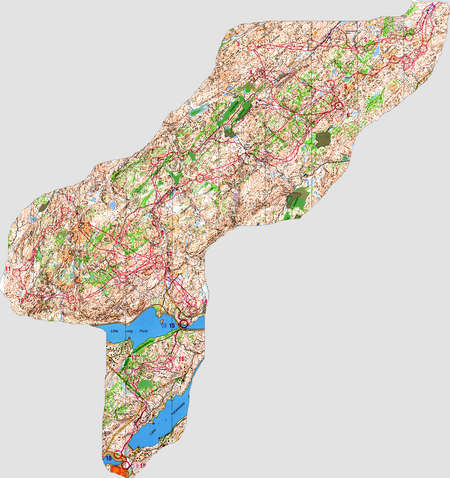