Home / MiniNews / WOC Sprint Relay: What a win by Denmark!

WOC Sprint Relay: What a win by Denmark!

Jan Kocbach August 1, 2015 MiniNews Comments Off on WOC Sprint Relay: What a win by Denmark! 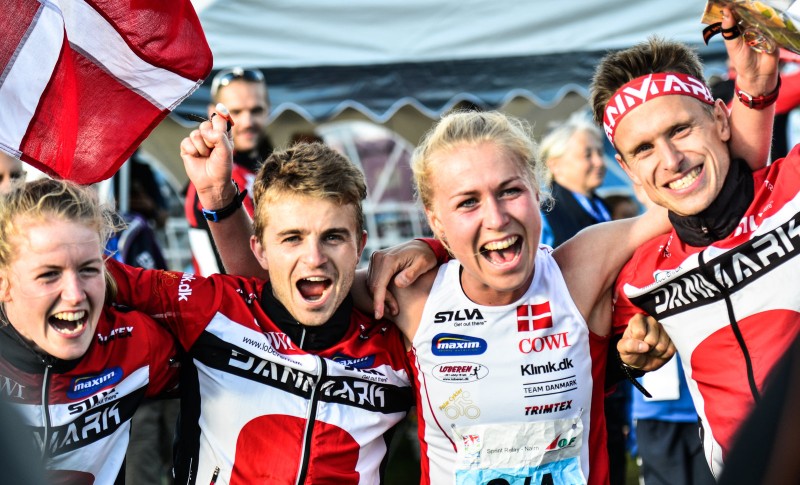 Emma Klingenberg owned the Scottish small town Nairn today on the first leg for Denmark – getting a big gap already after 2 minutes running. From there it was clear that this was Denmark’s day. In the end Norway surprised with silver, Russia took bronze as last year and Switzerland disappointed with a 4th place after being in the fight for gold until the middle of the last leg.

After the first leg the gap was 46(!) seconds for Denmark’s Klingenberg down to Italy in 2nd – Switzerland and Norway were 48 seconds behind. The spectators could see how Klingenberg stopped at several controls, made 100% sure she took the correct choice, and sprinted on in a speed nobody could match. – My race was good. I actually stopped to look at the map several times to make sure I got the right route choice, Klingenberg commented after her race.

Tue Lassen ran a solid second leg – losing some seconds all the way, but in the end letting Søren Bobach out with a clear 32 second lead. Bobach had some small trouble – losing half a minute to chasing Swiss Matthias Kyburz who ran a fantastic race again (only Mårten Boström, Finland could match his speed, but further back in the field).

Out on the last leg it was Maja Alm (Denmark) against Judith Wyder (Switzerland) – Wyder chasing only one second behind. Everything looked set for a tight fight all the way to the finish, but suddenly Alm got a big gap to Wyder – widening by the meter due to Wyder having problem with an injury. Alm just kept going and going – and in the end the margin was 1:21 to the silver medal!

Meanwhile there was a fight for bronze behind – at least that is what everybody thought.  Out onto the last leg it was Sweden and France closest, but France lost contact, and Sweden looked set for bronze at the arena passage with a 38 second gap to Norway and a chasing pack consisting of France, Russia, and Finland just behind. Towards the end of the last leg Norway’s Anne Margrethe Hausken Nordberg (17 seconds slower time than Alm) showed the same power she showed when winning O-Ringen less than 2 weeks ago – running in to a clear silver medal ahead of Russia’s Galina Vinogradova (10 seconds slower time than Alm). Swiss Wyder came disappointed to the finish to a 4th place.

Vinogradova was surprised to catch Wyder – and didn’t know she was running for a medal. – It was very fast – I didn’t realise my position until the second half. I saw Judith [Wyder], but initially didn’t believe I could catch her, or realise that I was in the running for the bronze medal, Vinogradova commented after the race.