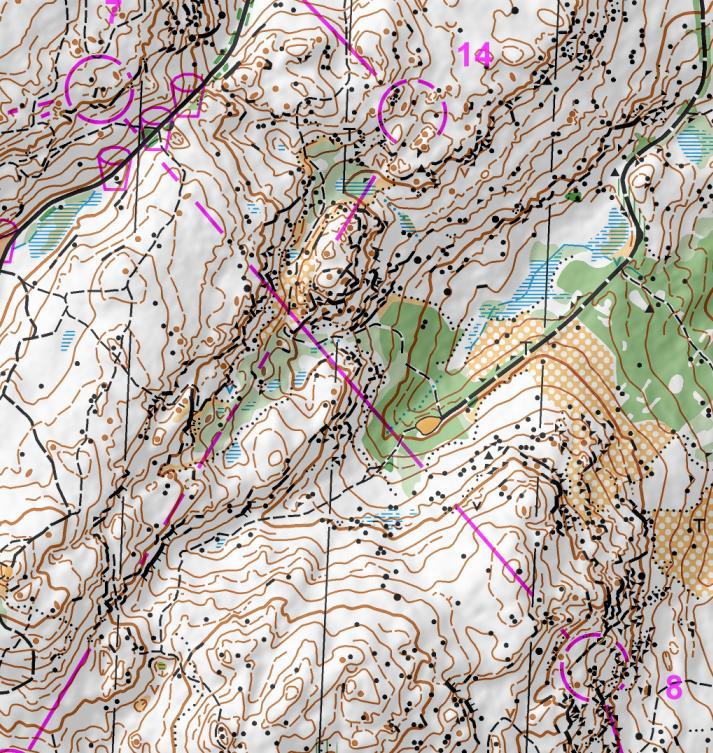 The runners met interesting, hilly courses with good and varied forking – the hilly area combined with varying runnability providing many interesting routechoices. Below follows a brief summary of the relays along with maps and leading results.

Andreu Blanes Reig brought SNO up into the lead after the 4th leg (“Långa natten” – the long night) – from there and on the SNO runners all ran excellent legs, and except for at the 9th exchange SNO was first at all exchanges. Erik Liljequist built up a 3 minute lead after 5 legs – a lead which first increased to nearly 4 minutes after 6 legs and then reduced down to less than 2 minutes after 8 legs.

Then Lundanes had a big unlucky moment;  the spectators following the TV broadcast could observe how Lundanes’ GPS suddenly stopped moving

On the 9th leg Halden’s Olav Lundanes set up his top speed and halfway throughout the leg Lundanes had brought Halden up into the lead along with SNO, Kalevan Rasti and IFK Göteborg. Then Lundanes had a big unlucky moment; the spectators following the TV broadcast could observe how Lundanes’ GPS suddenly stopped moving – and finally moving slowly down towards a nearby road. Later it was known that just when speeding up down a slope, Lundanes dislocated his shoulder and had to abandon the race.

After 9 legs it was clear that the fight for victory would be between IFK Göteborg, SNO and Kalevan Rasti – with Eskil Kinneberg, Jonas Leandersson and Thierry Gueorgiou battling in the forest. Kinneberg started nearly two minutes behind the two other teams, but managed to get up and make it a leading trio after some kilometers running. Gueorgiou then got a one minute lead through good running combined with a slightly shorter forking to the 7th control – but a slower routechoice to control 8 (see below) made him loose the advantage. 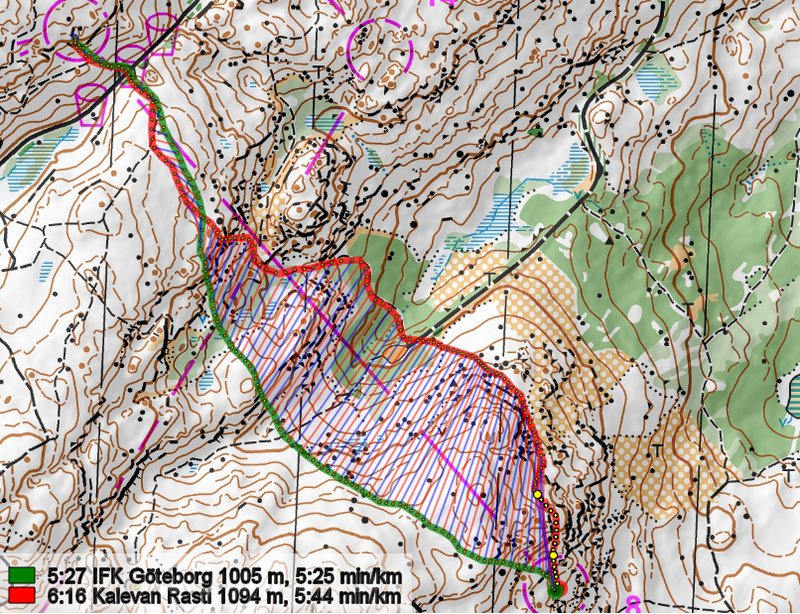 From there on it was a tight fight between the trio – nobody ever getting a gap of more than a few seconds until the finish. The last part could be followed live via a running camera man – impressingly keeping up with the leading trio as they sped up towards the finish. In the end Guergiou tried with a slightly different routechoice to the last control – losing the initiative and thus the fight was only between Leandersson and Kinneberg. Kinneberg punched first at the last control according to his original plan, but Leandersson was stronger on the last finish straight and could celebrate a popular victory.

In the women’s relay Halden had a fantastic first four legs of the relay – being in the lead at all four changeovers. After four legs Halden’s strong team had built up a nearly 2 minute lead to the followers after a strong 4th leg by Anni-Maija Fincke.

However, even a nearly four minute lead down to OK Pan Århus’s Maja Alm proved to be too little for Halden’s anchor woman Sabine Hauswirth.

Halden was passed by six teams after half of the leg – a big mistake in the tricky green area at the 9th control costing the Swiss national team runner the lead and the initiative in the competition.   Here Göteborg Majorna took over the lead with OK Pan Århus, IFK Lidingö, Nydalen and Koovee trailing. 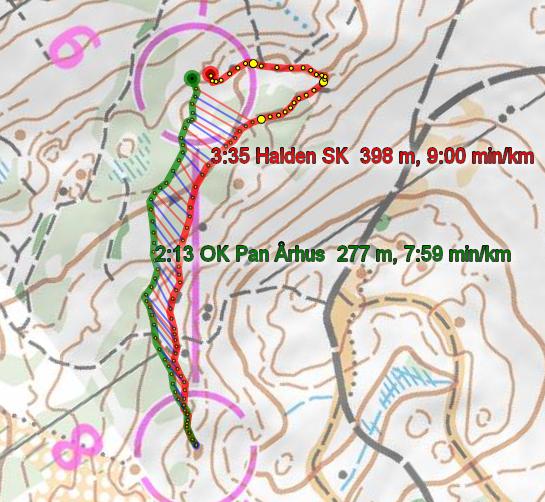 Göteborg Majorna’s gap was slowly eaten up by Nydalen, OK Pan Århus and IFK Lidingö – four teams building a leading group. The last forking at the 18th control did nothing to split up the group – neither did the routechoice on the  long routechoice leg to control 19.

However, on the uphill towards the ski jump in Falun, Alm and Hausken Nordberg proved that they were simply stronger runners than the others and opened up a gap. From there and on the fight on the last kilometer was between OK Pan Århus and Nydalen. On the last meters Alm was stronger – and OK Pan Århus could celebrate victory!