Home / Events / – A group of dizzy chickens around Simone

– A group of dizzy chickens around Simone

Jan Kocbach June 16, 2009 Events Comments Off on – A group of dizzy chickens around Simone 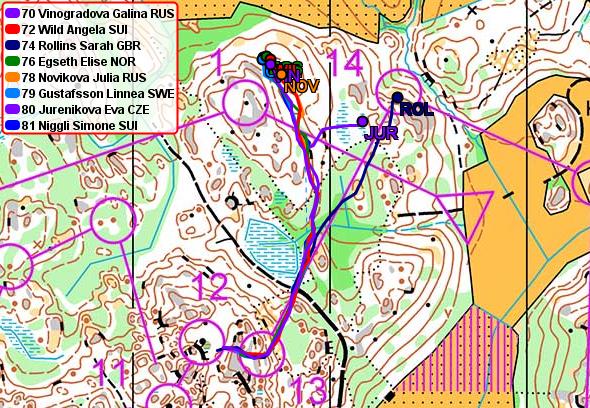 Did influence from other runners cost Simone Niggli a top position in NOC Middle? A detailed analysis of grouping in the Nordic Championships shows that even if there were a lot of packs – especially in the Middle – the runners getting the top positions did not gain a lot by running in packs. On the contrary – the analysis indicates that several runners might have lost time by being in big packs instead of gaining time as we have seen in other competitions.

– The influence-benefits for both races and all classes seems to be rather small, even if there were lots of meetings in the forest. I assume that it wasn’t the separation techniques alone but a combination of terrains, difficulty, long legs and separation, says Swiss Martin Lerjen who has made the analysis. Lerjen is the man who made a very interesting analysis of the packs in the European Champs last year, when there was lots of discussion about grouping.

– A lot of mistakes were made in packs, so it might well be that packs were no good this time, Lerjen comments. Lerjen does not say anything specific about the NOC middle distance races of Simone Niggli (10th place) or Emma Johansson (12th place), but the packfigures from NOC middle give Niggli and Johansson 1st and 2nd best “calculated running time without pack influence”, respectively. This is of course only a scientific calculation with no real significance – and we all know that an important part of the task for an orienteer is to manage to find the controls without being influenced by other runners. 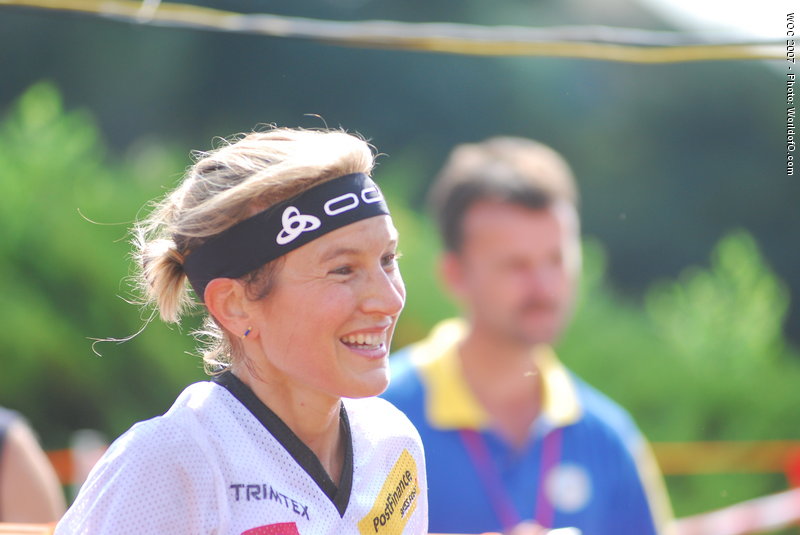 Still, it is interesting to put this into the context of what Linnea Gustafsson writes in her NOC Blog: 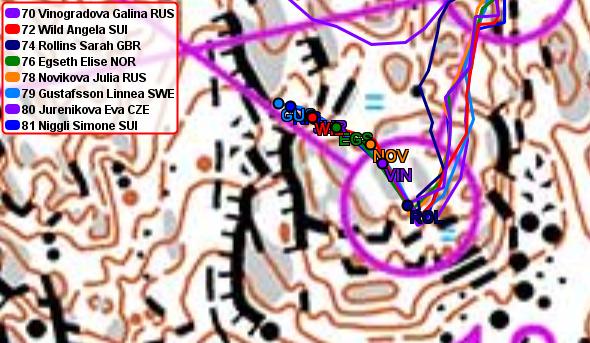 Of course Niggli should have tackled the pack of other runners – as this is part of the orienteering sport – but still very interesting to get some insight into what happened in the forest.

So – what is my answer to the question I posed at the start of this article? Probably not. From the GPS tracking you can observe that Niggli makes small mistakes all the way – also already at the 3rd control. For the big mistake to the 14th control, it seems that she is in command when things start going wrong. Still, all the runners around her may have influenced her concentration a lot – but to handle that is part of the game…

Going further on the packfigures from NOC middle, we see that Emma Johansson has the second best “calculated running time without pack influence”. However, when again looking at the GPS tracking (see screenshot below), we see that Emma Johansson was very much in command when making her mistakes – the other runners being at least 15-20 meters behind here. However, having other runners behind you may influence you to run faster than you should – and not concentrate enough on the orienteering… 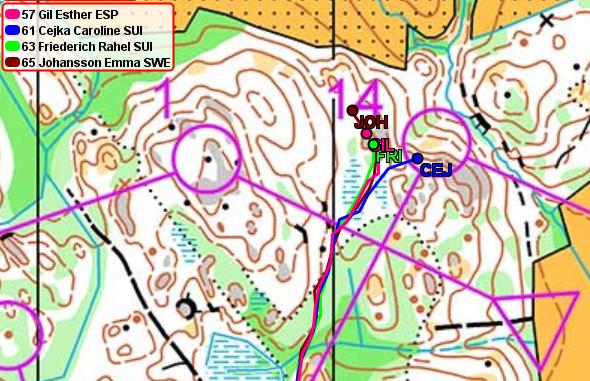 You can find a lot more information in the packfigures from NOC middle and long below combined with the GPS tracking. Be warned, though, that these figures may seem quite confusing at first sight – and it may take some work to understand all the details in the figures.

Treat this type of figures with care regarding individual runners – and take a look at the GPS tracking to see if your suspicions about groups are valid. The GPS tracking of all runners – as done at the Nordic Championships – actually makes it feasible for the IOF to some time in the future follow up the “sleeping” IOF Fair Play rule 26.2, stating “In an individual interval start race, competitors shall navigate and run through the terrain independently”. Packfigures are very useful in finding potential cases, but tracking is needed to make a detailed analysis for each case.

Compared to several previous championships, this years NOC was a success in the respect that the runners getting the top positions did not gain a lot by running in packs. As Lerjen states, this was only partly due to the forking system (which in my opinion works a lot better than the short butterflies with equal length we have seen a lot of the last years). More important is terrain, difficulty and a very wise use of long legs with different route choice alternatives (even in the “butterfly”).

For international championships in so-called continental terrain with better visibility in the forest and less route choice alternatives, it is a lot more difficult to cope with the grouping issue than in the terrain used in the Nordic Championships. If rule 26.2 should still be part of the IOF competition rules, imposed GPS tracking on all runners in international championships – along with some amendment to the IOF Fair Play rule 26.2 – might be something to work towards to ensure fair results.

Jan Kocbach is the founder of WorldofO.com - taking care of everything from site development to writing articles, photography and analysis.
@jankoc
Previous Full Jukola GPS Tracking now available
Next Fantasy WC: Remember to Set Up Your Team