The World Orienteering Championships start Sunday morning 09:00 CET with Sprint qualification. Impressive coverage with live video, GPS-tracking and live results for the championships is promised by the organizers (somewhat less coverage for qualifications than for finals, though). The first WOC final where medals are awarded starts already Sunday from 13:40 CET in the afternoon.

The championships continues through the coming week – the last competition being the Relay next Sunday. All individual events are also World Cup events. Below you find the key information you need in order to follow WOC 2010 in Trondheim, Norway. This page is planned to be updated with key information during WOC.

See more details about exact program for each competition at the bottom of this page – including exact start times for each category. 15 runners qualify from each heat in the qualifications for all disciplines.
Team leaders meeting is each evening at 19:00 CET. Expect startlists for the Quals to be available no sooner than that time the day before the event. Sprint Qual is Sverresborg, Sprint Final from Trondheim Town Square, Long and Middle Qualification are from Jervskogen Ski Centre, and all other races are from Granåsen Ski Centre.

The WOC organizers have a very good set of live services – it should be a delight to follow the WOC races from at home, at work or on your mobile phone. The live services consist of:

The link to the live centre will be available from Saturday.

Price for tracking and streaming is NOK 90,- (approx Euro 11.30), which gives you access to all four finals/relay in one package – thus quite affordable.

Remember to submit your team to the Fantasy World Cup 2010. All WOC finals are part of the World Cup, and 10 of the 13 World Cup events count in the overall Fantasy World Cup. The World of O Ranking Sprint for men and women is a good starting point for setting up your team for WOC Sprint.

The course is in two parts, and the competitors need to exchange map for the last part of the course. The exchange takes place when passing the arena.

Terrain qualification: Same as middle Q. Final: Same as middle F. The course is in two parts, and the competitors need to exchange map for the last part of the course. The exchange takes place when passing the arena.

There will be a LiveBlog during all of WOC in a cooperation between WorldofO.com and the WOC organizers in Trondheim. Again I will need help for moderating from some of you readers out there, and this time I’ll have the pleasure of giving out WOC 2010 Buffs to people helping with the moderation (please contact me by email at jan@kocbach.net as soon as possible, limited number). I will be reporting live from the arena/forest via mobile phone. All Tweets from Eliteorienteers go directly into the LiveBlog.

To all WOC participants: Please consider opening up a Twitter account at Twitter.com, and send an email to jan@kocbach.net with your account name – and tell us about your WOC experiences before/after each race. It takes less than 10 minutes to set up – and less than a minute for each Tweet. I’ll be in Trondheim and am willing to help if you need it… 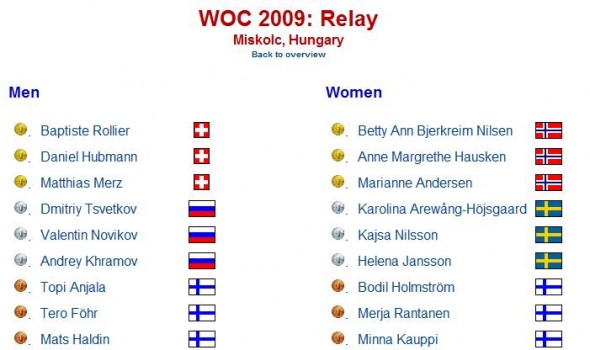 Jan Kocbach is the founder of WorldofO.com - taking care of everything from site development to writing articles, photography and analysis.
@jankoc
Previous Road to WOC: Japan (with maps)
Next WOC 2010 Sprint: Live from 09:00 CET