WOC 2016: Analysis Summary of All Races 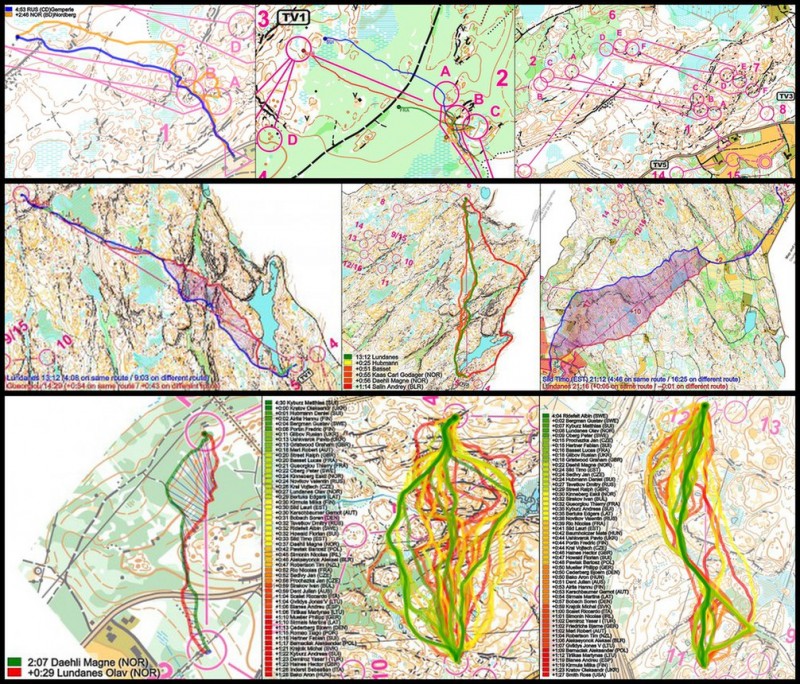 [With summary of all analyses & direct link to the original analyses] WOC in Strömstad has offered intriguing orienteering challenges for the world’s best athletes in 5 competitions; Sprint, Sprint Relay, Middle, Long and Relay.

Below a summary of the analysis are given for each race. In addition you find links to analysis articles, maps & results and the preview articles. See also 2500 pictures from WOC 2016.

Men summary: Only 4 men had the speed for Gold; Jerker Lysell, Matthias Kyburz, Daniel Hubmann and Kris Jones. Even if Lysell had some smaller routechoice mistakes, the Swede was the one with the most stable performance of the four with the winning speed – losing 8 seconds or less to the leg winner on all legs. Lysell was saved by the other top runners doing similar routechoice mistakes.

Women summary: Only three of the runners on the start had the speed required for the medals; the medalists Maja Alm, Judith Wyder (+25 seconds) and Anastasia Denisova (+42 seconds). The mistakes of these three were not so big that anyone else could have beaten them on this day – Galina Vinogradova in 4th was 1:13 behind. Of the three medalists, Alm had clearly the highest speed. After a slow start, she accelerated to a tempo nobody was close to follow. With a perfect race, Wyder could have managed to run on Alm’s time, but Alm was definitely the worthy winner.

Battle for GOLD between Alm and Wyder at #WOC2016 Sprint – will we see the same battle in Sprint Relay last leg? Start Sunday at 16:50 #orienteering #gpsanimation #worldofo

Maps & courses: Many athletes think the courses are too easy – few artificial boundaries are used. There are quite a few routechoices were runners lose time, but there are small time differences. The map has many cases of features which are too small according to recommended practise, also several breaking ISSOM (e.g. a routechoice from 10 to 11 in the women’s course were only one runners sees the shortest route where you have to run through a 0.2 mm wide opening).

Summary: Denmark’s super-sprinter Maja Alm decided the relay for Denmark for the second year in a row after having been served a perfect start position by her teammates Cecilie Friberg Klysner, Tue Lassen and Søren Bobach. Denmark’s runners all did very stable technical performances. Cecilie Friberg Klysner and Tue Lassen ran excellent on the first two legs and served Søren Bobach in a perfect lead position at the start of the third leg. Bobach lost some time to Sweden, but still managed to keep a safe gap to the toughest contender Switzerland – enough for last leg runner Maja Alm to run in to a safe victory. Switzerland lost the race on the 3rd leg when Martin Hubmann did some mistakes towards the end of the leg – but even without these mistakes it might have been too difficult for Swiss last leg runner Wyder to beat Alm.

Results: 1. Denmark, 2. Switzerland, 3. Sweden
WorldofO Tip: Not published, but Denmark was clear favourite ahead of Switzerland and Sweden
Comment:  Results as expected, but Sweden loses more on last leg than expected. Sweden might have had a chance for victory with Tove Alexandersson in the team, but that might have destroyed her Gold medal opportunities at Middle and Long.

Maps & courses: Courses are again on the easy side, but good for a Sprint Relay. The first forked control has forkings with much too big time differences; 8-12 seconds per leg. Except for this the forking is good. The map has similar issues as for the individual sprint.

Men summary:  The battle for Gold was decided on the last 6 minute loop after the arena passage. At the arena passage, Lundanes, Kyburz and Lundanes were within 15 seconds with Olav Lundanes first. In the finish the winning gap was increased to 23 seconds – but now with Kyburz on top with Lundanes in 2nd and Hubmann in 3rd. Lundanes lost the Gold towards the end of the course by running through a green area which was much greener & slower than corresponding areas earlier in the course. Lundanes had, however, lost more time earlier in the course by route misses.

Women summary: The fight for victory is between Kemp and Alexandersson, the lead changing between them until Alexandersson decides around 5 minutes before the finish when Kemp does a miss towards control 19.  There weret hree crucial legs in the course – leg 4 (routechoice leg where many runners lose time, including the silver and bronze medalists),  leg 10 (another routechoice leg where many runners lose time, including bronze winner Gemperle and Sweden’s Emma Johansson who was in third position ahead of this leg) and leg 19 (the leg where Kemp loses significant time; also a routchoice leg). Tove Alexandersson was the big favourite for the WOC middle distance in Tanum, but the Swedish runner got a surprisingly tough fight from Canadian Emily Kemp. After a miss by Kemp towards the end of the course,  Heidi Bagstevold (Norway, silver) and Natalia Gemperle (Russia, bronze) passed Kemp in the results.

Maps & courses: Courses are excellent with variation both in terrain type and leg characteristics; including interesting routechoice legs where many have trouble. Some discussions because Lundanes loses time towards end of course in green area which is denser/slower than areas drawn in the same way earlier in the course, but drawing of the green is correct in the area towards the end of the course. Also some complaints about the map have too many formlines and double formlines.

Men summary:  The course was characterized by several challenging long legs where both routechoice and execution was important in order to perform well. Olav Lundanes solved the long legs best, and in the medal fight it was good execution which was most important.  Most runners lost time because they got stuck several times on both the longest leg and in other places. Lundanes decides the Gold against Gueorgiou in the first half of the race were he took a 2 minute lead. Gueorgiou was 20 seconds faster in the second half of the race. The race was also characterized by many of the top runners running together in groups – maybe also deciding the medals.

Women summary: The Women’s WOC 2016 Long distance race was special in that there were big time difference already at the 2nd control. Many runners lost the race already at the 3.5 kilometer long leg to the 2nd control. The battle for victory was between the eventual winner Alexanderseson and Gemperle. Gemperle got the initiative in the race by winning the long 2nd leg with one minute, and soon after catching Wyder (4th in the competition). Gemperle and Wyder ran together for the rest of the competition.  Alexandersson ran a poor 2nd leg, and lost 3 minutes to Gemperle on this leg. The rest of the race Alexandersson ran a better technical race than Gemperle, gradually getting closer to Gemperle and in the end winning with 26 seconds. One key to Alexandersson’s win in this race is her performance on the leg to control 9 which she wins with 52 seconds. Another key to the victory is catching Hausken at the 9th control – the two are together from the 9th control to the finish, mostly with Hausken in front.

Maps & courses: The long legs offered very interesting routechoice challenges, the fact that execution partly was more important than routechoice was fine. The second half of the men’s course had more middle distance characteristics, though. Grouping was a big problem with groups influencing the medal decisions for both men and women – a three minute start interval for the last part of the start field should be re-considered (ref. the Grouping/spreading method report from 2009). The map in itself was good, the print quality however was horrible with many runners getting their maps ruined with problems to see the controls.

Men summary:  Norway had the best leg time on all three legs and took a clear victory – but it was still exciting all the way until the finish with Norway’s lead going down to half a minute after 3 controls on the last leg. Switzerland were 2nd, 3rd and 2nd on the three legs and finished 2nd. Sweden and France had very bad starts along with a range of other teams who made big mistakes early on the first leg. Sweden was saved by Bergman on the 2nd leg (2nd best leg time) & Lind (3rd best leg time) while the French runners had trouble on all three legs.

Women summary:   The WOC 2016 Women’s relay featured a very interesting battle between the six favourite teams Russia, Denmark, Finland, Switzerland, Sweden and Norway. Russia decided the relay by stable orienteering on all three legs. Denmark finished second after yet again being saved by a fantastic performance by Maja Alm who wins the last leg with 2 minutes. Finland was in gold position at the arena passage, but both Russia’s Gemperle and Denmark’s Alm chasing from behind were stronger in the end.

Results: 1. Russia, 2. Denmark, 3. Finland
WorldofO Tip:  1. Sweden (finished 5th), 2. Norway (finished 6th), 3. Russia (finished 1st). Denmark and Finland were tipped as outsiders.
Comment:  Women are completely unpredictable in the relays. Sweden made big mistakes on all three legs, and was never really in the fight for gold. Norway had a good start, but did quite big mistakes on both the 2nd and 3rd leg. Both Norway and Sweden were in the medal fight after two legs, but both anchors Alexandersson and Hausken Nordberg failed.

Maps & courses: The courses offered interesting orienteering were many athletes did mistakes without the course being unfairly tricky. The forking seemed to be fair. The map was again good.

Jan Kocbach is the founder of WorldofO.com - taking care of everything from site development to writing articles, photography and analysis.
@jankoc
Previous 2500 pictures from WOC 2016 now online!
Next Were the WOC 2016 maps good enough?